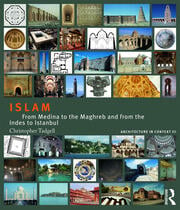 Islam: From Medina to the Maghreb and from the Indies to Istanbul

The Prophet Muhammad – acknowledged by his followers to have been the hand with which God wrote his definitive Word enshrined in the Koran – was born into the Quraishi tribe at Mecca c. 570 and died in Medina in 632. The great religion founded on that Word, which first claimed the submission (Islam) of the Arabs, rapidly expanded across North Africa, into southern Europe and east as far as China. This book examines the architectural tradition which developed with the religious culture. With its source in the ubiquitous courtyard house, the development of the mosque as both place of worship and the centre of the community, its form a response to the requirements of prayer set out in the Koran, was given a range of forms as Islam came up against the traditions of Egypt, Persia, India and China. The tradition developed further in tombs, palaces and fortifications, all of which are described and illustrated here.

The story continues with the glorious architecture of the Timurids, Safavids and Ottomans, using architects and craftsmen from a broad swathe of the world from Spain to India and beyond. Mosques expanded to unprecedented vastness, while colour and pattern were used to dazzling effect. And in Mughal India, a synthesis of traditional forms with those imported from Persia produced a series of magnificent mosques, citadels and tombs.

The architecture of Islam comprises a high proportion of the world’s most beautiful buildings, from perhaps the most perfect images of the lost Eden in the gardens of the Alhambra, to the built expression of the boundless expansion of the faith to be seen in the mosques of Ottoman Istanbul. This book covers the whole range in unprecedented depth, placing the development of the tradition in the context – religious, political, economic and technological – of the times.