Islam, Populism and Regime Change in Turkey
Making and Re-making the AKP 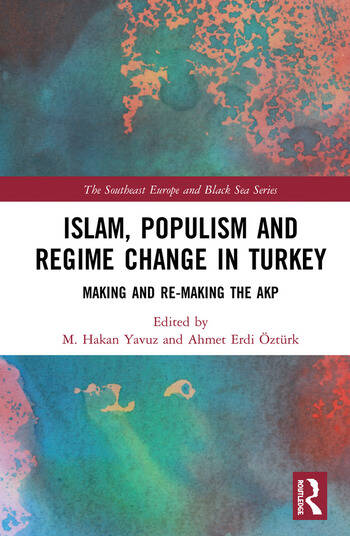 Islam, Populism and Regime Change in Turkey: Making and Re-making the AKP

Islam, Populism and Regime Change in Turkey explores the role of religion (Sunni, Hanefi Islam) in the transformation of Turkey under the reign of President Recep Tayyip Erdoğan and his Justice and Development Party (Adalet ve Kalkınma Partisi, AKP).

The chapters argue that the Turkish understanding of secularism was also one of the building blocks and the constitutive elements of Turkey’s modernization until the rise of the AKP. Currently, however, it seems that religion has become a new or re-born element of the new Turkey and has been transforming many areas such as: the media, the Kurdish issue, implementation of the rule of law, foreign policy and gender issues. This book therefore aims to scrutinize the question: how does a religion-based transformation in Turkey influence the raison d’etat of the state, and effect in various ways different areas such as gender, foreign policy, economy and socio-political relations of various power groups within the society?

Islam, Populism and Regime Change in Turkey will be of great interest to scholars of Religion and Politics, and governance in Turkey. It was originally published as a special issue of Southeast European and Black Sea Studies.

1. Turkish secularism and Islam under the reign of Erdoğan

2. From ‘clients’ to ‘magnates’: the (not so) curious case of Islamic authoritarianism in Turkey

3. Cold war era relations between West Germany and Turkish political Islam: from an anticommunist alliance to a domestic security issue

4. Understanding Turkish secularism in the 21st century: a contextual roadmap

5. An alternative reading of religion and authoritarianism: the new logic between religion and state in the AKP’s New Turkey

6. The intersectionality of gender, sexuality, and religion: novelties and continuities in Turkey during the AKP era

7. Islam, ethnicity and the state: contested spaces of legitimacy and power in the Kurdish-Turkish public sphere

8. Islam and economics in the political sphere: a critical evaluation of the AKP era in Turkey

9. The transformation of Turkey’s Islamic media and its marriage with neo-liberalism

10. From paradigm shift to retooling: the foundation and maintenance of the AKP

is a Professor of Political Science at the University of Utah, USA. His current projects focus on transnational Islamic networks in Central Asia and Turkey; the role of Islam in state- building and nationalism; ethnic cleansing and genocide; and ethno- religious conflict management. He is an author of nine books and around 60 articles on Islam, nationalism, the Kurdish question and modern Turkish politics. He has published in Comparative Politics, Middle East Critique, Middle East Journal, Oxford Journal of Islamic Studies, SAIS Review,Journal of Muslim Minority Affairs, Current History, Central Asian Survey, Journal of Islamic Studies and Journal of Palestine Studies. Some of his articles are translated into Arabic and Bosnian from English. He is an editorial member of Journal of Muslim Minority Affairs and Critique.

is Lecturer of Politics and International Relations at London Metropolitan University and visiting scholar at the Department of Political Science and International Relations, University of Birmingham, UK. He is the co-editor of the Edinburgh University Press Series on Modern Turkey. He was a post-doctoral fellow at the Institute for Research on Migration, Ethnicity and Society (REMESO), at Linköping University, Sweden. He is the co-editor of Authoritarian Politics in Turkey: Elections, Resistance and the AKP (2017) as well as three special issues on religion, politics and authoritarianism. He is the author of more than 20 articles on religion and global politics and modern Turkish politics. His work has been published in Politics and Religion, Journal of European Political Science, Religion, Ideology and Politics,Southeast European and Black Sea Studies, Journal of Critical Studies on Terrorism, Oxford Bibliographies, Journal of Research and Politics on Turkey, Muslim Year Book and Journal of Balkan and Near East Studies. He is a regular contributor to media outlets such as Open Democracy, The Conversation, Huffington Post and France 24.