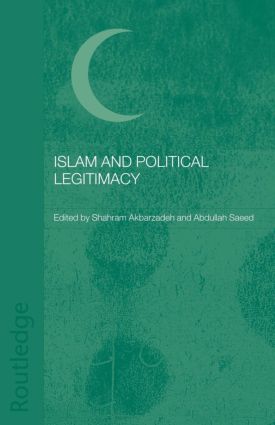 Akbarzadeh and Saeed explore one of the most challenging issues facing the Muslim world: the Islamisation of political power. They present a comparative analysis of Muslim societies in West, South, Central and South East Asia and highlight the immediacy of the challenge for the political leadership in those societies. Islam and Political Legitimacy contends that the growing reliance on Islamic symbolism across the Muslim world, even in states that have had a strained relationship with Islam, has contributed to the evolution of Islam as a social and cultural factor to an entrenched political force. The geographic breadth of this book offers readers a nuanced appraisal of political Islam that transcends parochial eccentricities. Contributors to this volume examine the evolving relationship between Islam and political power in Bangladesh, Indonesia, Iran, Malaysia, Pakistan, Saudi Arabia and Uzbekistan.

Researchers and students of political Islam and radicalism in the Muslim world will find Islam and Political Legitimacy of special interest. This is a welcome addition to the rich literature on the politics of the contemporary Muslim world.

Shahram Akbarzadeh is senior lecturer in Global Politics at the School of Political and Social Inquiry, Monash University, Australia. His research interests focus on the politics of Central Asia, Islamic

radicalism and the Middle East.

Among his latest publications are Muslim Communities in Australia (with Abdullah Saeed) and the Historical Dictionary of Tajikistan (with Kamoludin Abdullaev).

Abdullah Saeed is Associate Professor and Head of the Islamic Studies Programme at the Melbourne Institute of Asian Languages and Societies, the University of Melbourne. Among his recent publications are Islamic Banking and Interest, Freedom of Religion, Apostasy and Islam and Islam in Australia.