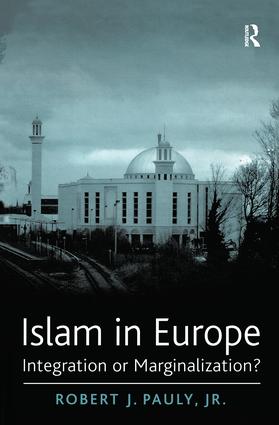 In this timely work, Robert J. Pauly, Jr. looks in detail at the impact of Islam’s presence in Europe. He examines five areas of particular importance: the effect of the growth of Muslim communities on the demographics of Western Europe generally, and France, Germany and the United Kingdom in particular; the consequences of the marginalization of Muslims on domestic and international security within and outside of Western Europe in the post-11 September 2001 era; the impact of the issue of Islam in Europe on the European Union’s ongoing deepening and widening processes; the potential correlation between the increased visibility of Islam in Europe and the growth of far-right political parties across the continent; and the broader relationships between the issues of Islam in Europe, Islam and Europe, and Islam and the West.

'Islam in Europe is incredibly topical given the world crisis that has evolved in the last few years. It is a thoroughly researched and prescient work that should be essential reading for scholars, politicians and the general public at large. In the Post-September 11 era, one cannot afford to put down this important book which promises to become a mainstay in the field of European Studies.' Associate Professor Peter Schulman, Old Dominion University, USA 'Islam's emergence as Europe's second largest religion is fraught with consequences for Europe as well as for Europe's relations with the United States and the rest of the world. This excellent study makes an important contribution to the understanding of this critical dimension of Europe and its future.' Professor Simon Serfaty, Old Dominion University, USA '…it contributes to the ever-widening debate on Islam in Europe today…The book also covers a lot of the well known texts and issues and sets out the key events in each country. It is a good source of information for those embarking on research looking at the Western European countries through which contemporary Islam was introduced.' The Muslim World Book Review 'The book is highly readable, analytical and thought provoking. In a way, the book has given a choice to Muslims in Europe to go in for integration or face societal and political marginalization.' USI Journal 'In this timely book, Robert J. Pauly correctly identifies the political challenge facing Europe: integrating its fifteen million Muslims.' Political Science Quarterly

Robert J. Pauly, Jr., is Associate Director of the International Development Program, and Assistant Professor of Political Science, at the University of Southern Mississippi, in Long Beach, Mississippi, USA