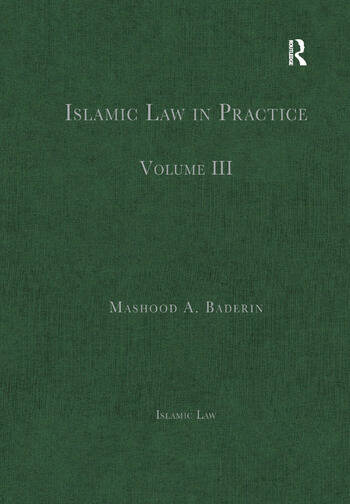 Islamic law influences the lives of Muslims today as aspects of the law are applied as part of State law in different forms in many areas of the world. This volume provides a much needed collection of articles that explore the complexities involved in the application of Islamic law within the contemporary legal systems of different countries today, with particular reference to Saudi Arabia, Morocco, Indonesia, Nigeria, Turkey, Malaysia and Pakistan. The articles identify the relevant areas of difficulties and also propose possible ways of realising a more effective and equitable application of Islamic law in the contemporary world. The volume features an introductory overview of the subject as well as a comprehensive bibliography to aid further research.

Contents: Introduction. Part I Theoretical Perspectives on the Practical Application of Islamic Law: From jurists’ law to statute law or what happens when the Shari’a is codified, Rudolph Peters; The compatibility dialectic: mediating the legitimate coexistence of Islamic law and state law, Abdullahi Ahmed An-NaÊ»im; ShariÊ»a and state in the modern Muslim Middle East, Nathan J. Brown. Part II Empirical Analyses of the Practical Application of Islamic Law: ShariÊ»a in the politics of Saudi Arabia, Frank E. Vogel; Islamic law in contemporary South Asia, Gregory C. Kozlowski; The Islamic legal system in Indonesia, Mark E. Cammack and R. Michael Feener; Expanding a formal role for Islamic law in the Indonesian legal system: the case of Mu’amalat, Alfitri; Islamic law as customary law: the changing perspective in Nigeria, A.A. Oba; Secular law and the emergence of unofficial Turkish Islamic law, Ihsan Yilmaz. Part III Islamic Family and Personal Status Laws in Practice: Family law & reform in Morocco - the Mudawana: modernist Islam and women’s rights in the code of personal status, Laura A. Weingartner; Protecting Muslim women against abuse of polygamy in Malaysia: legal perspective, Zaleha Kamaruddin and Raihanah Abdullah; Islamic law and gender equality - could there be a common ground? A study of divorce and polygamy in Sharia law and contemporary legislation in Tunisia and Egypt, Amira Mashhour; The legal impediments to the application of Islamic family law in the Philippines, Anshari P. Ali. Part IV Islamic Criminal Law in Practice: Judicial practice in Islamic criminal law in Nigeria - a tentative overview, Gunnar J. Weimann; Punishment in Islamic law: a critique of the Hudud Bill of Kelantan, Malaysia, Mohammad Hashim Kamali; Her honor: an Islamic critique of the rape laws of Pakistan from a woman-sensitive perspective, Asifa Quraishi; The 2006 Women Protection Act of Pakistan: an analysis, Niaz A. Shah. Part V Islamic Law of Financial Transactions in Pra

Mashood A. Baderin is Professor of Law at the School of Law, SOAS, University of London, UK.