Islamic Terror and the Balkans 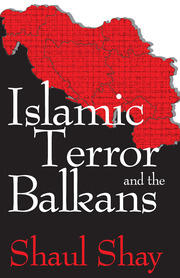 Islamic Terror and the Balkans

The disintegration of Yugoslavia in the early 1990s ended the Yugoslavian Federation, which for nearly fifty years had succeeded in preserving a delicate coexistence among the ethnic, religious, and national components contained within it. Following this, the Balkans became a violent arena of confrontation due to these warring factions. Islamic Terror and the Balkans describes and analyzes the growth of radical Islam in the Balkans from its inception during the years of World War II to the present.

Shay's account shows how the Bosnian War between the Muslims and the Serbs provided the historical opportunity for radical Islam to penetrate the Balkans, at a time when the Muslim world, headed by Iran and the various Islamic terror organizations, including Al-Qaida, came to the aid of the Muslims in Bosnia. In the framework of the mobilization of these entities in aiding the Muslim side in the conflict, the operational and organizational infrastructure of Iranian intelligence and the Revolutionary Guards was established, as well as those operated by other Islamic terror organizations.

When war in Bosnia ended, terrorist infrastructures remained in the Balkans and served as a basis for these entities' intervention in the confrontation that developed in the Balkans in the late-1990s, specifically in Kosovo and Macedonia. Today, the Balkans serve as a forefront on European soil for Islamic terror organizations, which exploits this area to promote their activities in Western Europe, Russia, and other focal points worldwide. Shay's analysis of terror activity in the aftermath of the September 11 attacks and exposure of terror cells throughout the world, and particularly in Europe, attest to the increasing involvement of the "Balkan alumni" and of the terrorist infrastructure from this area in creating global terror activity.