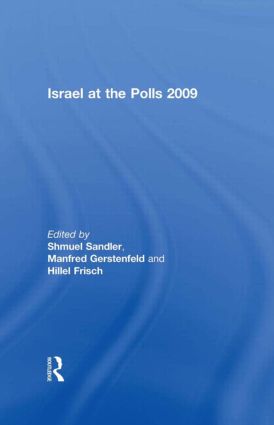 This book describes political and sociological developments in Israel before and after the February 2009 elections, alongside an analysis of electoral trends. It provides an effective analysis of contemporary political and sociological Israeli history. Rather than focusing narrowly on electoral politics alone, this book broadens its focus to make it relevant to undergraduate and graduate students in Middle Eastern, Israeli and Jewish studies and the liberal arts. Israel at the Polls has been updated and published annually for thirty years, providing readers with up-to-date analysis and continuity of scholarship; this book offers an expert long-term assessment of Israeli politics.

1. The 2009 Knesset elections: a foreign affairs perspective Shmuel Sandler and Hillel Frisch 2. The run-up to the elections: a political history of the 2009 campaign Manfred Gerstenfeld The Parties 3. Kadima goes back: the limited power of vagueness Giora Goldberg 4. The Likud: the struggle for the centre Abraham Diskin 5. The decline of the Labour party Efraim Inbar 6. Stability in the Haredi camp and upheavals in nationalist Zionism: an analysis of the religious parties in the 2009 elections Asher Cohen and Bernard Susser 7.The Israel Beiteinu (Israel Our Home) party between the mainstream and ‘Russian’ community politics Vladimir (Ze’ev) Khanin 8. Arab Israeli citizens in the 2009 elections: between Israeli citizenship and Palestinian Arab identity David Koren The Issues 9. Peace and security in the 2009 election Jonathan Rynhold 10. Corruption again, and again not decisive Ira Sharkansky 11. Israel’s religious vote in comparative perspective: an Africanist analysis William F.S. Miles

Shmuel Sandler is the Dean of the Faculty of Social Sciences, and Sara and Simha Lainer Chair in Democracy and Civility, at Bar-Ilan University, and is a fellow of the Jerusalem Center for Public Affairs, Israel.

Manfred Gerstenfeld is Chairman of the Board of Fellows of the Jerusalem Center for Public Affairs in Israel, and an editor of the Jewish Political Studies Review.