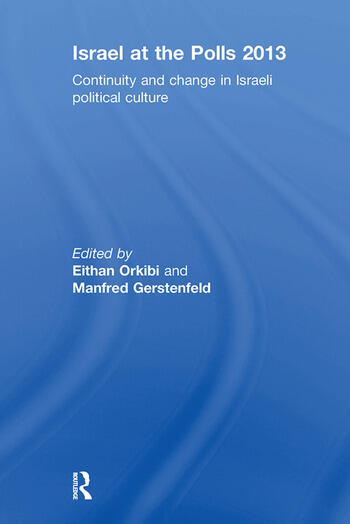 Israel at the Polls 2013: Continuity and Change in Israeli Political Culture

The 2013 elections took place less than two years after the overwhelming wave of social protests of summer 2011. At first, the election campaign did not raise much public interest, but the emergence of new players and young political forces energized the political race. Polls conducted throughout the campaign greatly deviated from the final results, which eventually enabled Prime Minister Benjamin Netanyahu to form a cabinet again, despite a loss of 11 seats for his list.

This book describes and analyses a variety of political and sociological developments in Israel both before and after the elections. These include the nature of the campaign, the developments in the National Camp, among religious Zionists, the ultra-Orthodox parties, and the Russian vote. Furthermore, it assesses the impact of media, including new media.

The variety of subjects makes the book suitable for undergraduate and graduate students in Middle-Eastern, Israeli, and Jewish studies, as well as political science and liberal arts in general. Israel at the Polls has been updated and published regularly for thirty-five years, providing readers with up-to-date analysis and continuity of scholarship. This book offers a long-term assessment of Israeli politics.

1. The Run-Up to Israel’s 2013 Elections: A Political History  Manfred Gerstenfeld

2. The Peculiar Victory of The National Camp in the 2013 Israeli Election  Arie Perliger and Eran Zaidise

3. ‘Something new begins’ – religious Zionism in the 2013 elections: from decline to political recovery  Anat Roth

4. An uneasy stability: the Haredi parties’ emergency campaign for the 2013 elections  Nissim Leon

5. The political transformation of the Israeli ‘Russian’ street in the 2013 elections  Vladimir (Ze’ev) Khanin

6. The Transmigration of Media Personalities and Celebrities to Politics: The Case of Yair Lapid  Rafi Mann

Eithan Orkibi is a lecturer in the Department of Sociology and Anthropology at Ariel University, and a member of the ADARR (Analysis of Discourse, Argumentation and Rhetoric) research group, Tel Aviv. He specializes in political culture, discourse analysis and persuasive communication.

Manfred Gerstenfeld is the Emeritus Chairman of the Jerusalem Center for Public Affairs, Israel. He is the former editor of The Jewish Political Studies Review, and has published twenty-three books covering diverse areas such as anti-Semitism, Judaism and the environment, contemporary history, and Jewish public affairs.