Israel at the Polls 2015
A Moment of Transformative Stability 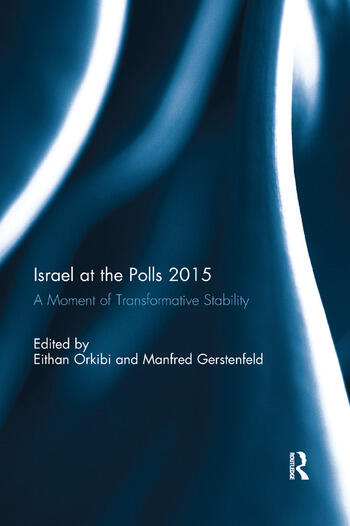 Israel at the Polls 2015: A Moment of Transformative Stability

Less than two years after winning the 2013 elections, Prime Minister Benjamin Netanyahu announced his intention to dissolve his government, paving the way for general elections. While the initial impression was that the upcoming elections were "pointless" and "unnecessary", the campaign gradually turned into a passionate and dramatic political competition, which reflected – and reenergized – the ideological, social, ethnic and cultural divides of Israeli society.

This book describes and analyses a great variety of political, sociological and cultural dimensions of the 2015 elections for the 20th Knesset. Covering issues such as voters’ behaviour, coalition formation, figures of leadership, political identities, political communication and persuasion, this rich collection of essays offers a unique and comprehensive perspective on Israeli political culture in general, and on the Israeli society in the midst of the 2015 elections in particular. It also offers theoretical insight to anyone interested in parliamentary politics and party systems in general.

This book was originally published as a special issue of the journal Israel Affairs.

1. Introduction: Israel at the polls 2015: a moment of transformative stability Eithan Orkibi

Part I: Campaign and Results Analysis

2. The run up to Israel’s 2015 elections: a political history Manfred Gerstenfeld

3. Who turned out at the polls? Socioeconomic and geographic perspectives on 2015 voter turnouts in Israel Nir Atmor and Chen Friedberg

4. A new integrated model of the formation of coalitions: perspectives on the Twentieth Knesset Dganit Ofek and Assaf Meydani

7. The covert political ethnicity of the Kulanu party Nissim Leon

8. Back to the Knesset? Israeli Arab vote in the 20th Knesset elections Arik Rudnitzky

9. Leadership and identity politics on the eve of the Israeli 2015 elections: children’s perspectives Michal Alon-Tirosh and Dorit Hadar-Shoval

10. Not all about that Facebook: political campaigns and civic engagement in the 2015 elections Sharon Haleva-Amir

13. The enemy within us: emotional politics in the 2015 Israeli elections Mira Moshe

14. Pragmatic and value-based argumentation in the 2015 Israeli elections David Kleczewski and Ruth Amossy

15. The Bibi Sitter and the Hipster: the new comical political discourse Rafi Mann

Eithan Orkibi is a Lecturer in the Department of Sociology and Anthropology at Ariel University, Israel, and a member of the ADARR (Analysis of Discourse, Argumentation and Rhetoric) research group, Tel Aviv.

is Emeritus Chairman of the Jerusalem Center for Public Affairs, and has published numerous books on political, environmental, economic, and Jewish issues.