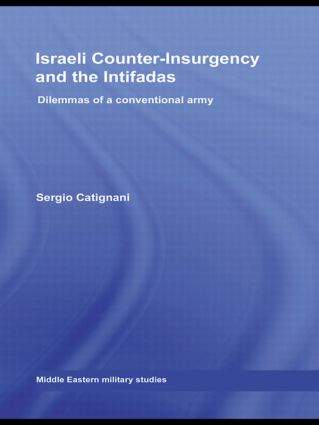 Israeli Counter-Insurgency and the Intifadas

This volume analyzes the conduct of the Israel Defence Forces’ (IDF) counter-insurgency operations during the two major Palestinian uprisings (1987-1993 and 2000-2005) in the Territories of the West Bank and Gaza Strip.

It employs primary and secondary resources to produce a comprehensive analysis on whether or not the IDF has been able to adapt its conventional conduct of warfare to the realities of the Israeli-Palestinian low-intensity conflict and achieve any sort of victory over the Palestinian insurgents. Sergio Catignani provides new insights into how conventional armies struggle with contemporary insurgency by looking in particular at the strategic, operational, tactical and ethical dilemmas of the IDF over the last two decades. By examining the way in which the IDF and the Israeli security doctrine were formed and developed over time, he explores the extent to which Israeli security assumptions, civil-military relations, the organizational culture, command and control structure, and conduct of the IDF have affected its adaptation to the contemporary Israeli-Palestinian low-intensity conflict.

Israeli Counter-Insurgency and the Intifadas will be of much interest to students of low-intensity conflict and counter-insurgency, the Israeli army, the Middle Eastern conflict and strategic studies in general.

'Catignani’s Israeli Counter-Insurgency and the Intifadas is a lucid, thorough and comprehensive account which fills a major gap in the existing literature. It will be of immense interest to students of low-intensity conflict and counter-insurgency, the Israeli–Palestinian conflict and strategic studies in general. Highly recommended.'

'…a useful and well-written survey of the development of military-political relations in Israel, and of the Israeli response to the emergence of low-intensity conflict as a central factor facing Israeli strategists.'

'This clearly written, balanced and accessible book sets out to analyse the tactical and operational conduct of the Israel Defence Forces’ (IDF) counter-insurgency operations during two major Palestinian uprisings (1987–93) It aims to examine ‘whether or not the IDF has been able to adapt its conventional order of battle and conduct of warfare to the realities of the Israeli–Palestinian low intensity conflict (LIC) and achieve some sort of victory over the Palestinian insurgency’.The book also looks at ‘what effects both Palestinian Intifadas have had on the combat morale of the IDF’ something which the author sees as strongly related to combat efficiency.'

Sergio Catignani is a Max Weber Fellow at the European University Institute, Florence. He has a PhD in War Studies from King’s College, London.