Israeli Institutions at the Crossroads 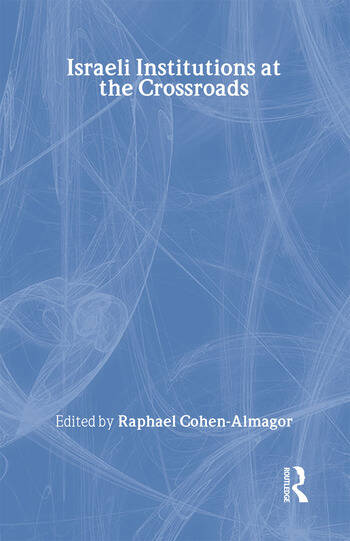 Israeli Institutions at the Crossroads

This is a fascinating collection of essays about Israeli society and its institutions. It is written by practitioners who have experience and understanding, who are equipped with the insight and knowledge, and who bore responsibility while serving the public in the various institutions. Among the authors are former State President Yitzhak Navon, former cabinet minister Gad Yaakobi, former Deputy Speaker of the Knesset Naomi Chazan, former Attorney General Elyakim Rubinstein, Former Supreme Court President Meir Shamgar, the State Comptroller Eliezer Goldberg, and former member of the Press Council Raphael Cohen-Almagor. The decision-makers provide fresh, practical observations and personal, valuable accounts of their respective roles.

The book aims to tackle timely concerns, analyzing the relationships between democracy and bureaucracy, the military-political complex, the issue of separation of powers in democracy and more specifically the role of the Supreme Court, and the need for a written, solid constitution. It also discusses citizenship education.

The book will be useful to researchers on Israeli democracy, students, teachers, historians, sociologists, political scientists and legal scholars who wish to better understand this fascinating society and its institutions.

1. Introduction  2. The Crisis of Governance: Government Instability and the Civil Service  3. Citizenship Education in Israel - A Jewish-Democratic State  4. The Political-Military Complex: The IDF's Influence Over Policy towards the Palestinians since 1987  5. On the Need for a Constitution  6. Presidency in Israel: Formal Authority and Personal Experience  7. The Government  8. The Knesset  9. The Attorney General in Israel: A Delicate Balance of Powers and Responsibilities in a Jewish and Democratic State  10. Particularist Considerations and the Absence of Strategic Assessment in the Israeli Public Administration: The Role of the Comptroller  11. The Press Council  12. Israeli Institutions at the Crossroads

Raphael Cohen-Almagor is a Senior Lecturer and Chairperson of Library and Information Studies at the Department of Communication, University of Haifa.

Raphael Cohen-Almagor received his doctorate in politics from Oxford University (1991). In 1999-2000 he was awarded the Fulbright-Yitzhak Rabin Award and was a Visiting Professor at UCLA School of Law and Department of Communication. He was Chairperson of Library and Information Studies (2000-2003) and is Assoc. Prof. at the Department of Communication, University of Haifa, where he directs the Center for Democratic Studies. Raphael is the author of The Boundaries of Liberty and Tolerance (1994), Speech, Media and Ethics (2001, 2005), The Right to Die with Dignity (2001), and Euthanasia in the Netherlands (2004). He also wrote two poetry books: Middle Eastern Shores (1993), and Travels (forthcoming). Raphael is also the editor of several books, among them Basic Issues in Israeli Democracy (1999, Hebrew); Liberal Democracy and the Limits of Tolerance: Essays in Honor and Memory of Yitzhak Rabin (2000), Medical Ethics at the Dawn of the 21st Century (2000), and Challenges to Democracy: Essays in Honour and Memory of Isaiah Berlin (2000). His newest book The Scope of Tolerance will be published by Routledge in 2006.

'These articles, besides providing analysis, contain in-depth explanations of the various Israeli government institutions, both their functions and history.' - Middle East Journal