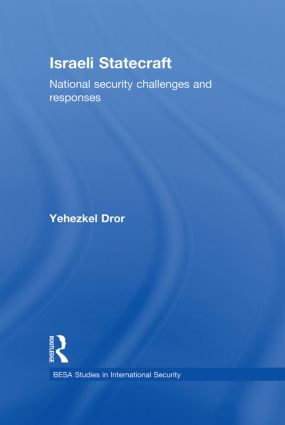 This book offers a systematic examination, analysis and evaluation of Israeli national security statecraft in terms of challenges and responses.

Providing an in-depth analysis of Israeli statecraft challenges and responses, this interdisciplinary book integrates social science and security studies with public policy approaches within a long-term historical perspective on the Arab-Israeli conflict. These scholarly approaches are synthesized with extensive personal knowledge of the author based on involvement in Israeli political-security policy making. This book makes use of conceptualizations of statecraft such as 'fuzzy gambling' and interventions with critical mass in ultra-dynamic historical processes to help clarify Israel's main statecraft successes and failures, alongside the wider theoretical apparatuses these concepts represent. While focused on Israel, these theoretical frameworks have important implications for the academic study of statecraft and statecraft praxis worldwide.

This book will be of much interest to both statecraft practitioners and to students of Israeli politics and security, the Middle Eastern conflict, strategic studies and IR/security studies in general.

'Dror writes in a uniquely crisp and compact style, with readable lists of clustered ideas, backed up with voluminous documentation (the bibliography lists c.900 items). He is not shy about giving praise, but is mostly critical of scholars and politicians for a variety of shortcomings, while urging a higher rationality under the umbrella term of 'statecraft,' and making a large number of provocative--but well-informed--21st century forecasts and proposals from an Israeli vantage point. This is futures-thinking at its best: sophisticated, broad-ranging, and challenging. And a valuable non-European/American perspective on world affairs in general and the Middle East in particular.' - Michael Marien, Global Foresight Books

'Perhaps the most thoroughly scrupulous assessment of Israel's political and security paradigms ever published. [Dror] advances an extremely compelling argument for the strategic urgency of striving for a regional peace. His book is a powerful indictment of every Israeli government that has failed to advance this strategic goal . . . Scrupulously rigorous, boldly visionary and refreshingly blasphemous, [Israeli Statecraft] is necessary reading for anyone for whom the future of Israel is important.' - Yonatan Touval, Haaretz, January 2012

‘Israeli statecraft is incredibly prescient in examining the long-term effects of the democratization of the Arab world and the decision by the Palestinians to seek membership at the United Nations… Dror correctly takes to task Western and Israeli opinion-makers who argue, naively, that the mere fact of democratization will make the Arab world more peaceful toward Israel.’ -- Seth Frantzman, The Hebrew University of Jerusalem, Digest of Middle East Studies, Spring 2012

Yehezkel Dror is Professor of Political Science and Public Administration, Emeritus, at the Hebrew University of Jerusalem, and has published numerous articles and 15 books in ten languages. He is a former senior staff member of RAND Corporation and an advisor to heads of governments in Israel and other countries.