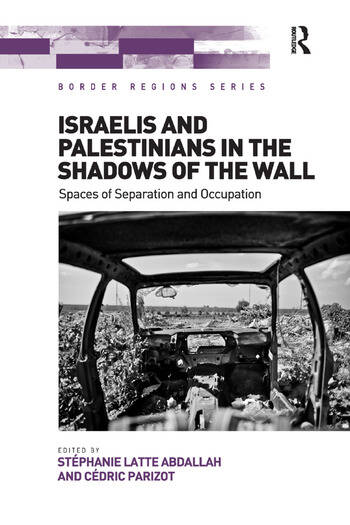 Israelis and Palestinians in the Shadows of the Wall: Spaces of Separation and Occupation

Shedding light on the recent mutations of the Israeli separation policy, whose institutional and spatial configurations are increasingly complex, this book argues that this policy has actually reinforced the interconnectedness of Israelis and Palestinian lives and their spaces. Instead of focusing on the over-mediatized separation wall, this book deals with what it hides: its shadows. Based on fieldwork studies carried out by French, Italian, Israeli, Palestinian and Swiss researchers on the many sides of the Israeli-Palestinian divide, it highlights a new geography of occupation, specific forms of interconnectedness and power relations between Israeli and Palestinian spaces. It offers a better understanding of the transformation of people’s interactions, their experiences and the ongoing economy of exchanges created by the separation regime. This heterogeneous regime increasingly involves the participation of Palestinian and international actors. Grounded in refined decryptions of territorial realities and of experiences of social actors’ daily lives this book goes beyond usual political, media and security representations and discourses on conflict to understand its contemporary stakes on the ground.

Contents: Preface; Introduction. The shadows of the wall: reappraising the Israeli occupation regime, Stephanie Latte Abdallah and Cedric Parizot. Part I Geographies of Occupation: Outsourcing the checkpoints: when military occupation encounters neoliberalism, Shira Havkin; Denial of borders: the Prison Web and the management of Palestinian political prisoners after the Oslo Accords (1993-2013), Stephanie Latte Abdallah; Constitutionalism in colonial context: the Palestinian basic law as a metaphoric representation of Palestinian politics (1993-2007), Emilio Dabed; What are we talking about when we talk about 'geographies of occupation'?, Ariel Handel. Part II The Economy of Separation: Porosity, fragmentation, and ignorance: insights from a study of freight traffic, Yaakov Garb; From chocolate bars to motor cars: separation and goods trafficking between Israel and the West Bank (2007-2010), Basel Natsheh and Cedric Parizot; The rise and fall of Gaza's tunnel economy (2007-2014), Nicolas Pelham; Economic discourses and the construction of borders in the Israeli Palestinian space since the 1967 occupation, Lev Luis Grinberg. Part III Stories at the Margins: Operationalizing nationalism: the security practice and the imagined figure of the 'Arab' enemy among Israeli 'security amateurs', Dganit Manor; Identity, solidarity, and socioeconomic networks across the separation lines: a study of relations between Palestinians in Israel and in the Occupied Territories, Elisabeth Marteu; From a 'gay paradise' to a pioneer frontier: constructs of the 'frontier' in the activist struggle and activist discourse of LGBTQs in Israel and Palestine, 1988-2012, Valerie Pouzol. Part IV Political Crossings: Activists without borders? Tours to Israel and the Palestinian Territories organized from France, Marc Hecker; Israel to Palestine, and back: meeting with post-2000 Israeli activists against the occupation, Karine Lamarche; Bodily relief: some observations on martyrdom operations in Palestine, Esmail Nashif. Bibliography; Index.

’This book makes a significant contribution to the study of Israeli occupation and its economic, social and political implications in the West Bank and the Gaza Strip. The multi-disciplinary group of contributors, including anthropologists, economists, geographers and political scientists, critically analyse and theoretically conceptualize the geopolitical conditions in the West Bank and Gaza over the past two decades, highlighting the colonial nature of Israeli politics on one hand and the Palestinian response to it on the other. This carefully-edited volume, which has great relevance to the current events in Israel\Palestine, is an important, detailed study which will serve scholars, students and those who are interested in the politics of the region.’ Haim Yacobi, Ben Gurion University of the Negev, Israel ’Through an interdisciplinary approach, the authors of this thought-provoking book contribute to counter the usual stereotypes about the wall in Palestine/Israel and unveil the multiplicity of surveillance mechanisms at work in the Occupied Territories. Besides being a welcome addition to the knowledge on new forms of borders, the book sheds light on two societies forged together by the logic of the military occupation.’ Riccardo Bocco, Graduate Institute of International and Development Studies - IHEID, Switzerland ’The critical perspectives found in this timely volume reveal the Wall as a central element in an emergent reality marked by complex forms of control, social relations, territoriality, violence, and governmentality. The book’s conceptual sophistication is matched by its careful attention to the diverse experiences of local actors for whom life, work, and politics are inseparable from the Wall’s considerable reverberations.’ John Collins, St. Lawrence University, USA This book questions the dominant narratives of occupation, showing how asymmetrical interdependence works. The approach opens new perspectives for all those, in the ac