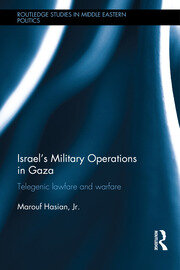 Civilians in Gaza and Israel are caught up in complex, violent situations that have overstepped conventional battle lines. Both sides of the conflict have found ways to legitimate the use of violence, and continually swap accusations of violations of domestic and international humanitarian laws.

provides an ideological critique of the legal, military, and social media texts that have been used to legitimate historical incursions into the Gaza, with special focus on Operation Protective Edge. It argues that both the Palestinians and the Israelis have deployed various forms of ‘telegenic’ warfare. They have each used argumentative rhetorics based on competing interpretations of events, and are locked in a battle to convince international audiences and domestic constituencies of the righteousness of their causes. This critical genealogical study analyses a range of texts and images, from selfies circulated near the Gaza border to judicial opinions produced by the High Court of Israel.

With its multidisciplinary approach and original analysis of the Israel/Gaza situation, this book will be of interest to students and scholars of Middle East studies and the Arab-Israeli conflict, as well as security studies and communication studies.

1 Telegenic Lawfare and Warfare and the Rhetorical Framing of Gaza Conflicts 2 Domestic and International Critiques of Israeli Policies in the Gaza, 2000-2013 3 Occupational Hazards, and the Evolutionary, Rhetorical Development of Israeli Targeted Killing Rationales 4 Disengagement from Gaza, "Institutionalized Impoverishment," and the Biopolitics of Israeli Pressuring of Gazans, 2005-2013 5 Arguing About the Legality and Legitimacy of Operation Protective Edge, 2014 6 Public Diplomacy and the Post-Disengagement Social Media Wars, 2005-2014 7 There are No "Innocent Civilians" In Gaza: Anticipating Post-Human Framings of the Gaza Strip

Marouf Hasian, Jr. is Professor in the Department of Communication at the University of Utah. His research interests include critical security studies, critical legal studies, and post-colonial analyses.