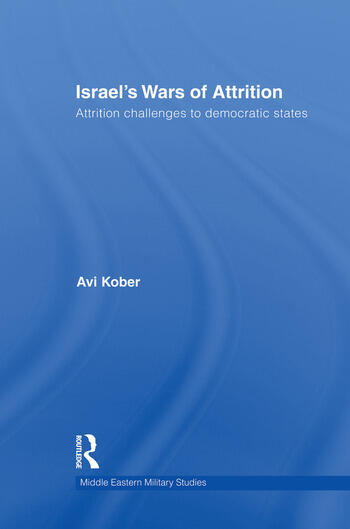 This book analyzes the way Israel has coped with nine wars of attrition from the 1950s to the recent Second Lebanon War (2006), questioning the belief that Western democracy cannot sustain prolonged wars of attrition.

Challenging Israel with attrition has been compatible with the 'Arab way of war', which emphasizes staying power, and with the belief that democracies cannot tolerate wars of attrition, either economically or psychologically. Israel for its part developed a self-image of incapacity to sustain prolonged wars, committing itself to a traditional offensive approach to blitzkrieg, whenever possible. The book offers an account of nine wars of attrition that Israel was involved in over almost 60 years, from Palestinian infiltration and fedayeen activities against Israel in the early 1950s, through to the Second Lebanon War in 2006. The author uses these cases to challenge the myth that Israel cannot afford to become involved in a draining war of attrition.

Focusing on central aspects typical of Western democracies engaged in wars of attrition â€“ operational effectiveness; the societal staying power; the economic burden of the war; moral dilemmas; and conflict management problems - the book challenges the myth that Israel cannot afford to become involved in a draining war of attrition, while at the same time highlighting the fact that in its wars of attrition Israel has not always succeeded in avoiding undesired escalation.

This book will be of much interest to students of strategic studies, Israeli history, Middle Eastern politics, and security studies in general.

Avi Kober is a member of the Department of Political Studies at Bar Ilan University, Israel and is a Senior Research associate with the BESA Center for Strategic Studies.

Introduction  1. Attrition in Modern and Post-Modern War  2. Israeli Attrition Aversion and the Emergence of Israeli Attrition Conception  3. The Operational Aspect: The Role Played by Offense and Defense  4. Societal Staying Power  5. Economic Sustainability  6. Fighting with One Hand Tied Behind the Back: Bridging Morality and Effectiveness  7. Beyond Staying Power: Escalation, Deterrence, and War Outcomes.  Conclusion

Avi Kober is a member of the Department of Political Studies at Bar Ilan University, Israel and is a Senior Research associate with the BESA Center for Strategic Studies.