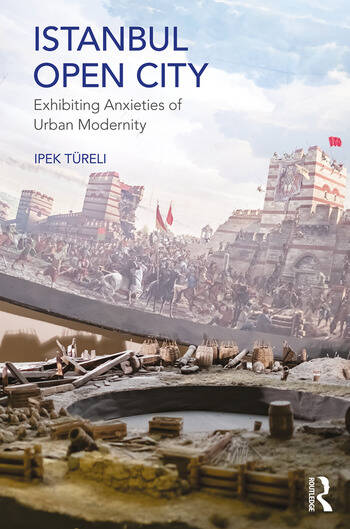 Urban theory traditionally links modernity to the city, to the historical emergence of certain forms of subjectivity and the rise of important developments in culture, arts and architecture. This is often in response to technological, economic and societal transformations in the nineteenth- and early twentieth-centuries in select Euro-American metropolises. In contrast, non-Western cities in the modern period are often considered through the lens of Westernization and development. How do we account for urban modernity in "other" cities?

This book seeks to highlight cultural creativity by examining the diverse and shifting ways Istanbulites have defined themselves while they debate, imagine, build and consume their city. It focuses on a series of exhibitionary sites, from print press/photography, cinema/films, exhibitions of architectural heritage, theme parks and museums, and explores the links between these popular depictions through shared practices of representation. In doing so it argues that understanding how the future is imagined through images and interpretations of the past can broaden current theoretical thinking about Istanbul and other cities.

In line with postcolonial calls for a comparative urbanism that decouples understanding of the modern from its privileged association with Western cities, this book offers a new perspective on the lens of urban modernity. It will appeal to urban geographers and historians, cultural studies scholars, art historians and anthropologists as well as planners, architects and artists.

1. Introduction: The Future of the City as a Collage of Pasts

7. Conclusion: Refuge in the Open City

Ipek Türeli is Canada Research Chair and Associate Professor of Architecture at McGill University, Canada. She holds a PhD in Architecture from the University of California Berkeley, USA. Her published work focuses on visualizations of the city in photography, film, exhibitions, theme parks and museums. She has been awarded several grants and fellowships for this work, by the Graham Foundation, the Middle East Research Competition, the Andrew Mellon Postdoctoral Fellowship at Brown University and the Aga Khan Fellowship at MIT. She is the co-editor of Orienting Istanbul (2010), Istanbul Nereye? (2011) and guest editor of International Journal of Islamic Architecture’s special issue on "Streets of Protest" (March 2013).

"Türeli’s exploration of anxiety proves a useful frame from which to understand responses to rapid urbanization and concerns over inclusions and exclusions in visions of the nation. Istanbul Open City is embedded in the question of representation and visual culture and thus most engaged with those who craft images, circulate Güler’s photographs, advocate for preservation, or design tourist attractions. It is these actors’ anxieties that are most visible, and the ways those anxieties play across class and ideological lines are less obvious." Ella Fratantuono, Journal of Urban History

"The author takes the reader on a stroll through the city via five "exhibitionary sites"—photography, cinema, exhibition, architecture, and museography—that she identifies as key visual ventures in the negotiation of Istanbul’s past.  Istanbul Open City will interest those engaged in urban history, architecture, and the built environment, as well visual culture and cultural heritage. Bringing together these often-isolated disciplinary fields is perhaps the greatest strength of the book, and the source of its many valuable insights into urban culture. I have no doubt that Türeli’s work will lead to more scholarly engagement with the concept of the "open city.""
-  Virginie Rey, University of California-Irvine. Published on H-Urban.

"Türeli skillfully negotiates two key challenges for scholars of Istanbul: First, she successfully moves outside of the methodological nationalism (or empire-ism) that frames much of the scholarship on Istanbul. Second, Türeli complicates an approach that analyzes how theories or processes from "elsewhere" arrive in Istanbul. Where successive processes of Westernization, modernization, globalization, and neoliberalization are imported into an analysis of the city… it has shifted our attention away from the complex ways that people in Istanbul make sense of being in their city. In asking us to think in a new away about the anxieties generated by being an "open city," Türeli has given us a book to better understand not only Istanbul, but cities around the world."
- Timur Hammand, The AAG Review of Books, 7.3

"Overall, Istanbul Open City successfully reveals and explains the relationships between urban anxieties and the media through the thoughtful investigation of photojournalism, cinema, theme parks and museums. The book covers a large span of time from the 1950s to today, boasting an eclectic narrative. The book also functions as a reference work, with each chapter written as a stand-alone entry. When read in succession, however, the chapters establish continuity of affiliation between exhibition sites and their depictions of urban anxieties."
- Sezen Kayhan, journal of visual culture