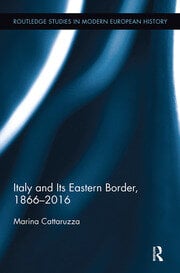 This is the first scholarly work in Modern European History which elucidates consistently how border issues affect the history of nations and states in the 19th and 20th centuries. The book rethinks the Italian history of the last 150 years from the perspective of its eastern periphery and of the profound impact that events on the border had on the core of the country.

1. The Kingdom of Italy and the Irredentist Dilemma

2. From Irredentism to Nationalism

7. The Eclipse of the Italian State: From September 8, 1943 to the Eve of the Yugoslav Occupation of Venezia Giulia

8. From the "Race for Trieste" to the London Memorandum

9. From the London Memorandum to the End of the Long Post-War Era

Marina Cattaruzza is Professor of Modern and Contemporary History at Universität Bern.