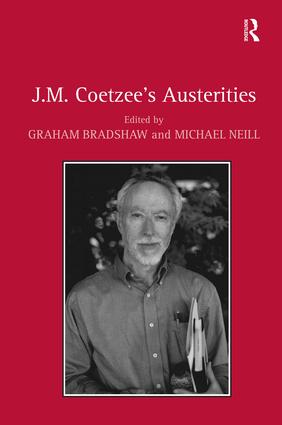 Representing a wide range of critical and theoretical perspectives, this volume examines J.M. Coetzee's novels from Dusklands to Diary of a Bad Year. The choice of essays reflects three broad goals: aligning the South African dimension of Coetzee's writing with his "late modernist" aesthetic; exploring the relationship between Coetzee's novels and his essays on linguistics; and paying particular attention to his more recent fictional experiments. These objectives are realized in essays focusing on, among other matters, the function of names and etymology in Coetzee's fiction, the vexed relationship between art and politics in apartheid South Africa, the importance of film in Coetzee's literary sensibility, Coetzee's reworkings of Defoe, the paradoxes inherent in confessional narratives, ethics and the controversial politics of reading Disgrace, intertextuality and the fictional self-consciousness of Slow Man. Through its pronounced emphasis on the novelist's later work, the collection points towards a narrato-political and linguistic reassessment of the Coetzee canon.

'With fine contributions from Derek Attridge, David Attwell, Theresa and Lindiwe Dovey, Michael Neill, Lars Engle, and Zoe Wicomb, among others, this collection stands out in the field of academic criticism on J.M. Coetzee. The standard of scholarship is consistently high and the essays often elegant and inventive as they offer new strategies for reading one of the major authors of our day.' Rita Barnard, University of Pennsylvania, USA

'The volume will be of interest to literary critics, psychologists, sociologists, men and women of letters, linguists, and all lovers of good reading. The book’s appearance is timely and significant, in particular to those who are interested in the development of English literature in South Africa and the trends in the South African English language… very successful, instructive, and attractive.' African Studies Quarterly