Jack Nichols, Gay Pioneer
"Have You Heard My Message?" 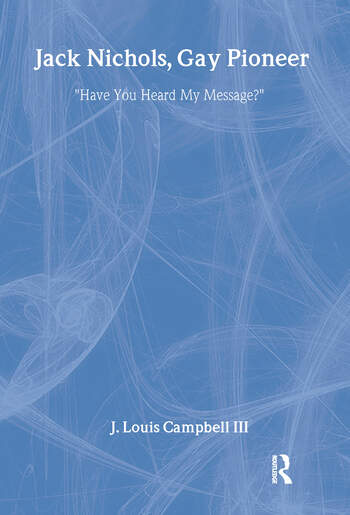 Jack Nichols, Gay Pioneer: "Have You Heard My Message?"

One of the founders of the gay and lesbian liberation movement, Jack Nichols was a warrior for gay equality. Recounting his life and work, Jack Nichols, Gay Pioneer: “Have You Heard My Message?” skillfully weaves the story of a man, a movement, and a moment that shaped gay and lesbian history. This powerful biography captures the wisdom, passion, and spirit of a prolific activist and inspirational human being who refused to be silent in a society that considered homosexuality to be sinful and criminal.

As a journalist, activist, and editor of the first gay weekly newspaper in the United States, Jack Nichols left a legacy of gay rights, gay pride, and tremendous courage. Covering episodes before and after Stonewall, during the AIDS epidemic, and beyond, Jack Nichols, Gay Pioneer charts the life of this pivotal figure from his childhood in the suburbs of Washington, DC, to his final impassioned days in a Florida cancer treatment center in 2005. This book also explores Nichols’ family history and its unique influence on his activist tendencies, as well as his revolutionary relationship with Lige Clark and their status as “the most famous homosexuals in America.”

Thoughtful and moving, Jack Nichols: Gay Pioneer also includes the ideas Nichols used to bring the movement to critical mass, and the sources that were influential to his work. Some of the topics detailed in this book are the early influence of Burns and Whitman on the homosexual movement, the integration of androgyny and anarchism into his activist philosophy, his attack on the psychiatric establishment’s theory of homosexuality as a “sickness”, and his work and vision in men’s liberation.

Jack Nichols, Gay Pioneer: “Have You Heard My Message?” offers a compelling look at the man and the movement, as well as a wealth of hard-to-find summaries on underground gay journalism, detailed references, personal photographs, and a complete bibliography of Nichols’s major writings. This book is an indispensable resource for anyone interested in the history and future of LGBT movements, as well as students, educators, and researchers seeking a comprehensive and thorough treatment of this revolutionary figure.