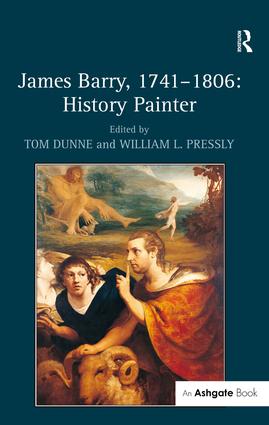 Bringing into relief the singularity of Barry's unswerving commitment to his vision for history painting despite adverse cultural, political and commercial currents, these essays on Barry and his contemporaries offer new perspectives on the painter's life and career. Contributors, including some of the best known experts in the field of British eighteenth-century studies, set Barry's works and writings into a rich political and social context, particularly in Britain. Among other notable achievements, the essays shed new light on the influence which Barry's radical ideology and his Catholicism had on his art; they explore his relationship with Reynolds and Blake, and discuss his aesthetics in the context of Burke and Wollstonecraft as well as Fuseli and Payne Knight. The volume is an indispensable resource for scholars of eighteenth-century British painting, patronage, aesthetics, and political history.

'Absorbing, varied, meticulous, convincing - these essays will constitute the monument of Barry scholarship for a long time to come.' Michael Charlesworth, University of Texas at Austin, USA ’The book will be an indispensable resource for scholars of eighteenth-century British painting, patronage, aesthetics, and political history.’ University College Cork News ’This specialist book makes a welcome addition to our understanding of this controversial figure.’ The Art Newspaper 'There can be no doubt that this volume is a hugely valuable addition to Barry studies and to the literature of later eighteenth-century British art in general, and Ashgate should be congratulated on publishing a book as potentially uncommercial as Barry’s art proved in his lifetime.' The Burlington Magazine 'This edited volume […] offers much needed scholarship on an overlooked artist, given the quality of his ambitious oeuvre… The book is undoubtedly an erudite and highly valuable authoritative reference book for students and scholars who want to look into Barry’s achievements.' Miranda '[The volume’s] scholarship is impressive, its writing stimulating, and its approaches engaging. Blakeans will benefit from these lively discussions of another renegade artist.' Blake/An Illustrated Quarterly

Tom Dunne is Professor Emeritus of History at University College Cork, Ireland. William Pressly is a Professor in the Department of Art History & Archaeology at the University of Maryland, College Park, USA.