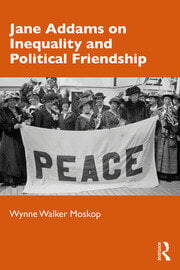 In this book, Wynne Walker Moskop addresses the practical and theoretical problem of how unequal political friendships evolve toward arrangements the parties consider reciprocal and just, a problem neglected by scholars of democracy who associate reciprocity and justice only with equal parties. Jane Addams insisted that Hull House was not a charity with philanthropic aspirations; rather it had to bring “two classes” to a shared purpose and more egalitarian relation. The problem was, and still is, how?

Drawing on several bodies of scholarship—including Addams’s writings, secondary works about her collaborations, literature on Aristotelian political friendship, and feminist scholarship on the global migration of care workers—Moskop shows the importance of Addams’s practices to the continuing relevance of unequal economic relations for shaping political friendship.

Contributing to a lively conversation about Addams’s work as a pragmatist thinker and social reformer that began three decades ago, Jane Addams on Inequality and Political Friendship is an invaluable resource to students of democratic theory, feminist political theory and philosophy, and American pragmatism. It illuminates the importance of overlooked conditions for friendship and justice in unequal relations, given people’s ongoing subordination because of race, class, gender, and citizenship status in the U.S. and transnationally.

Wynne Walker Moskop is Associate Professor of Political Science and affiliate Associate Professor of Women’s and Gender Studies at Saint Louis University. Moskop teaches undergraduate and graduate courses on American political thought, feminist theory, contemporary ideologies, and the history of political thought. Her articles and reviews have appeared in a range of journals, including American Political Thought, American Quarterly, the Journal of Political Psychology, American Studies, Political Theory, American Political Science Review, the Quarterly Journal of Ideology, and The Journal of Politics.

"Over the past quarter century, a number of scholars have enlivened an appreciation for just how innovative Jane Addams’ thinking is. Wynne Walker Moskop offers original and compelling analysis that Addams was masterful at fostering mutually-beneficial political friendships across class social standing—a skill desperately needed in our current divided social and political climate."

"In today’s divisive political environment, this book is a timely guide to political friendship as a foundation for democratic life. Moskop has given us Jane Addams’ much needed model of friendship in the midst of inequities as a possible political path forward."

"To some, the call for political friendship sounds too much like a call for civility. In short, its radicalism is in doubt. But as Wynne Walker Moskop shows, Jane Addams turns this potentially conservative concept into a disruptive practice. Moskop argues that Addams developed a model of friendship that highlights rather than hides inequality. Moskop pursues her argument through a sensitive and systemic reading of three of Addams’s books spanning the whole of her public concerns, describing a model of political friendship that points the way to effective transnational political collaboration. From Addams, Moskop derives lessons that theorists, social reformers, and community organizers in the twenty-first century would do well to remember."

"In Jane Addams on Inequality and Political Friendship, Wynne Walker Moskop, a political scientist at St. Louis University, joins the list of feminist scholars who focus on material generally neglected by their peers. Her challenging and illuminating volume's key point is as important and relevant today as it was in Addams's own time: the mutuality of gaps and benefits to those on both sides of unequal relationships."