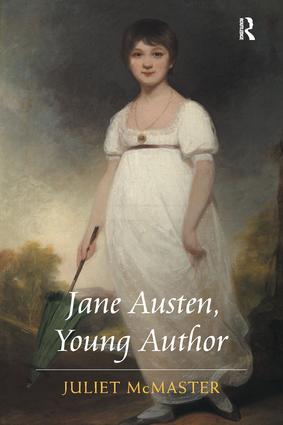 In her lively and accessibly written book, Juliet McMaster examines Jane Austen’s acute and frequently uproarious juvenile works as important in their own right and for the ways they look forward to her novels. Exploring the early works both collectively and individually, McMaster shows how young Austen’s fictional world, peopled by guzzlers and unashamed self-seekers, operates by an ethic of energy rather than the sympathy that dominates the novels. A fully self-conscious artist, young Jane experimented freely with literary modes - the epistolary, the omniscient, the drama. Early on, she developed brilliantly pointed dialogue to match her characters. Literary parody impels her creativity, and McMaster’s sustained study of Love and Friendship shows the same intricate relation of the parody to the work it parodies that we later see with Northanger Abbey and the Gothic novel. As an illustrator herself, McMaster is especially attuned to the explicit and sometimes hilarious descriptions of bodies that preceded Austen’s famous reticence about physicality. Rather than focusing on the immaturities of the juvenilia, McMaster maps the gradual shifts in tone and emphasis that signpost Austen’s journey as a writer. She shows, for instance, how the shameless husband-hunting in The Three Sisters and the vigorous partisanship of The History of England lead on to Pride and Prejudice. Her book will appeal to Austen’s critics and to passionate general readers, as well as to scholars working in the fields of juvenilia, children’s literature, and childhood studies.

'Juliet McMaster argues in this perceptive and hugely entertaining study that "if you don't know the juvenilia, you don't know Austen." The Austen she shows us is the author of rowdy tales of exuberant, self-confident women elbowing their way through the marriage market; but while the characters themselves lack self-awareness, Austen herself is trying out voices, experimenting with parody, and testing the limits of her humor. For the reader of her mature novels, McMaster's expert awareness of the continuities and cul-de-sacs of this early writing can only enhance our enjoyment of Austen's comic styles and emergent seriousness.' Valerie Sanders, University of Hull, UK 'Juliet McMaster is so convincing that it now seems negligent for any book on Jane Austen not to include the juvenilia. Nuanced and comprehensive in its analysis and delightfully unapologetic in its vindication of Austen’s early writings both for what they promise and for what they deliver, this book gives them the undivided attention they deserve. This book will appeal to a wide audience as it sheds light on not only Austen’s juvenilia but also the art of illustrating and editing them. Many readers will welcome McMaster’s argument that some of Austen’s early texts can stand on their own. McMaster gives us a young satirist who was very funny, very well-read, and wise beyond her years.' Barbara K. Seeber, Brock University, Canada

Juliet McMaster, FRSC, is Distinguished University Professor Emerita at the University of Alberta, Canada. She is the author of Jane Austen the Novelist and co-editor of The Cambridge Companion to Jane Austen.