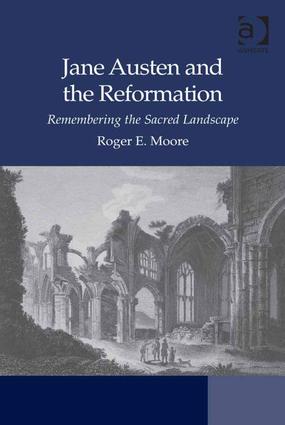 Jane Austen and the Reformation

Jane Austen's England was littered with remnants of medieval religion. From her schooling in the gatehouse of Reading Abbey to her visits to cousins at Stoneleigh Abbey, Austen faced constant reminders of the wrenching religious upheaval that reordered the English landscape just 250 years before her birth. Drawing attention to the medieval churches and abbeys that appear frequently in her novels, Moore argues that Austen's interest in and representation of these spaces align her with a long tradition of nostalgia for the monasteries that had anchored English life for centuries until the Reformation. Converted monasteries serve as homes for the Tilneys in Northanger Abbey and Mr. Knightley in Emma, and the ruins of the 'Abbeyland' have a prominent place in Sense and Sensibility. However, these and other formerly sacred spaces are not merely picturesque backgrounds, but tangible reminders of the past whose alteration is a source of regret and disappointment. Moore uncovers a pattern of critique and commentary throughout Austen's works, but he focuses in particular on Northanger Abbey, Mansfield Park, and Sanditon. His juxtaposition of Austen's novels with sixteenth- and seventeenth-century texts rarely acknowledged as relevant to her fiction enlarges our understanding of Austen as a commentator on historical and religious events and places her firmly in the long national conversation about the meaning and consequences of the Reformation.

"Moore’s beautifully researched, original, and compelling work of scholarship provides a full and nuanced account of the nostalgia for Catholic monasteries evident in Austen’s work. The book is revelatory, and will open the eyes of many a reader to Austen’s deep game of historical and cultural critique." - Laura Mooneyham White, University of Nebraska - Lincoln, USA

"Moore’s historically informed close readings, coupled with his deep knowledge of Austen’s attentiveness to religious matters, sets the stage for future studies of her other novels along similar lines. The result is an authoritative volume on Austen’s participation in a tradition of English religious criticism. A boon to students and scholars of English literary history, this book also is precisely what Austen lovers need to have on hand if they truly want to answer the question, "What would Jane do?" - William E. Engel, Sewanee Review, Volume 124, Number 4, Fall 2016, pp. 665-666

Roger E. Moore is Principal Senior Lecturer in English and Associate Dean for Undergraduate Education in the College of Arts & Science at Vanderbilt University, USA.