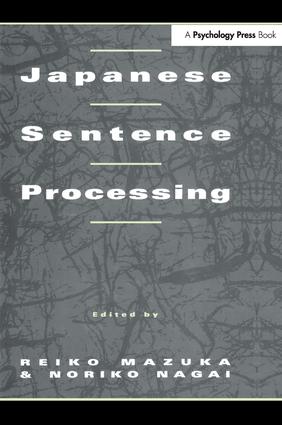 This volume is a direct result of the International Symposium on Japanese Sentence Processing held at Duke University. The symposium provided the first opportunity for researchers in three disciplinary areas from both Japan and the United States to participate in a conference where they could discuss issues concerning Japanese syntactic processing. The goals of the symposium were three-fold:

* to illuminate the mechanisms of Japanese sentence processing from the viewpoints of linguistics, psycholinguistics and computer science;

* to synthesize findings about the mechanisms of Japanese sentence processing by researchers in these three fields in Japan and the United States;

* to lay foundations for future interdisciplinary research in Japanese sentence processing, as well as international collaborations between researchers in Japan and the United States.

The chapters in this volume have been written from the points of view of three different disciplines, with various immediate objectives -- from building usable speech understanding systems to investigating the nature of competence grammars for natural languages. All of the papers share the long term goal of understanding the nature of human language processing mechanisms. The book is concerned with two central issues -- the universality of language processing mechanisms, and the nature of the relation between the components of linguistic knowledge and language processing. This volume demonstrates that interdisciplinary research can be fruitful, and provides groundwork for further research in Japanese sentence processing.

"…makes an important contribution, not only to the field of Japanese processing but also to human language processing in general, addressing the issue of whether the parsing mechanism is universal and what parameters are to be incorporated, if any….the book has succeeded in laying an important cornerstone in Japanese sentence-processing research."