Japan’s Civil-Military Diplomacy
The Banks of the Rubicon 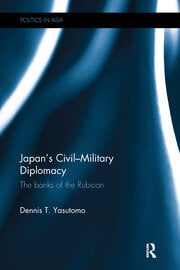 Japan’s Civil-Military Diplomacy: The Banks of the Rubicon

Since the early 1990s, there has been a clear evolution in the military dimension of Japanese diplomacy. From Gulf War I in 1991 to the present day, an incremental but unmistakable acceptance of, and resort to, military dispatches has taken place, and yet crucially, Japan has not morphed into a traditional military power.

Exploring Japan’s involvement in both Afghanistan and Iraq, this book examines the evolution and nature of the new civil-military dimension in Japanese foreign policy. It shows how foreign aid, Japan’s traditional non-military diplomatic tool, was merged with the operations of the Japanese Self-Defense Force in Iraq and the activities of NATO-ISAF forces in Afghanistan, and emphasises the centrality of civilian power to Japanese foreign policy and diplomacy. However, Dennis Yasutomo argues that while a new civil-military security culture is replacing the old merchant state culture of pacifism and anti-militarism, Japan does not yet qualify as a military "normal nation". Further, the book’s exploration of the increased utilization of military power within the context of civilian objectives and non-military diplomatic instruments, sheds light on the current build-up of Japanese military power in East and Southeast Asia amid territorial disputes and nuclear threats, and highlights the impact that Japan’s new civil-military diplomacy may have on wider international affairs in the 21st Century.

Drawing on interviews with key actors in Tokyo, as well as with practitioners who have served on the ground in Iraq and Afghanistan, this book will have broad appeal to students and scholars working on Japanese politics and diplomacy, military and security studies and international relations.