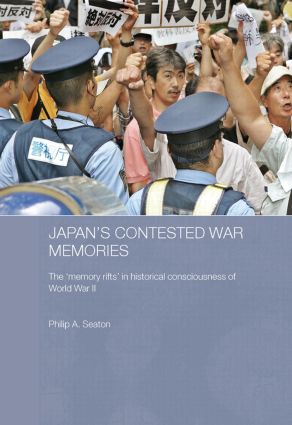 By Philip A. Seaton

Japan's Contested War Memories is an important and significant book that explores the struggles within contemporary Japanese society to come to terms with Second World War history. Focusing particularly on 1972 onwards, the period starts with the normalization of relations with China and the return of Okinawa to Japan in 1972, and ends with the sixtieth anniversary commemorations.

Analyzing the variety of ways in which the Japanese people narrate, contest and interpret the past, the book is also a major critique of the way the subject has been treated in much of the English-language. Philip Seaton concludes that war history in Japan today is more divisive and widely argued over than in any of the other major Second World War combatant nations. Providing a sharp contrast to the many orthodox statements about Japanese 'ignorance', amnesia' and 'denial' about the war, this is an engaging and illuminating study that will appeal to scholars and students of Japanese history, politics, cultural studies, society and memory theory.

'This book has much to offer to journalists and students of comparative media and memory studies as well as the general reader interested in contemporary Japan. In deconstructing the common notion of Japan as the odd one out with respect to memory of World War II, Philip Seaton levels the interpretative playing field to show that Japan’s memory culture is consistent with the dynamics of a democratic, late-capitalist society deeply affected by global trends in public culture… the book’s sizeable acomplishments. As the first systematic survey of the Japanese (and to an extent also the international) media’s role in Japan’s struggle with war memory, it certainly offers a refreshing and highly welcome contribution to the comparative memory literature.' - Franziska Seraphim, Japan Forum, 20:1, March 2008

'[T]his book is a fine addition to our library of ever more nuanced works on modern Japan, taking as it does a distinctive perspective on issues which will surely not leave television screens, newspapers and other media for quite some time.' - Ian Astley, The International Journal of Asian Studies

'Seaton’s work… should…be understood for the insights and theoretical innovations it offers. In this sense, the volume both complements and goes beyond previous academic studies of Japan’s problematic wartime past' - Eyal BEN-ARI/The Hebrew University of Jerusalem

"[Seaton] is to be congratulated for producing a highly readable and well-organized monograph, commendable both for its message and its method. His book is of huge value for disabusing foreign, largely nonacademic, commentators of a widely shared and derisive myth: 'the Japanese' suffer from historical amnesia except when wallowing in the self-pity of victim consciousness." - Bob Tadashi Wakabayashi, York University

Introduction 1. Historical Consciousness in Contemporary Japan 2. The 'Long Postwar' 3. 'Addressing the Past' 4. The War as a Current Affairs Issue 5. August Commemorations 6. History and Ideology 7. War Stories 8. Regional Memories 9. War and the Family. Epilogue

Philip A. Seaton is an Associate Professor in the Graduate School of Media and Communication, Hokkaido University, Japan. His webpage, which contains links to many online resources and an online appendix, is www.philipseaton.net.