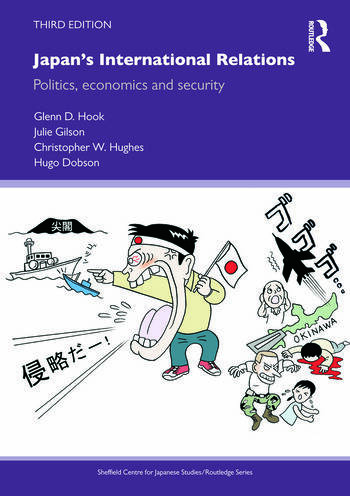 The latest edition of this comprehensive and user-friendly textbook provides a single volume resource for all those studying Japan's international relations. It offers a clear and concise introduction to the most important aspects of Japan's role in the globalized economy of the twenty-first century. The book has been fully updated and revised to include comprehensive discussions of contemporary key issues for Japan’s IR, including:

Extensively illustrated, the text includes statistics, maps, photographs, summaries and suggestions for further reading, making it essential reading for those studying Japanese politics and the international relations of the Asia Pacific.

A note on the cover:

The cover illustration entitled 'Double Standard' is a Japanese manga penned by satirical artist Ichihanahana in November 2010 regarding rising Japanese nationalism, Japan-China tensions over the disputed territory of the Senkaku islands and the US presence in Okinawa. This manga demonstrates many of the key themes in Japan’s ties with China and the US, but also a number of other central features of Japan’s international relations as explored throughout this text.

Glenn D. Hook is Professor of Japanese Studies in the School of East Asian Studies, University of Sheffield.

Julie Gilson is Senior Lecturer in the Department of Political Science and International Studies, University of Birmingham.

Hugo Dobson is Professor of Japan's International Relations in the School of East Asian Studies, University of Sheffield.

'The launch of China’s first aircraft carrier, North Korea’s belated return to the Six Party Talks, the crisis over the Fukushima nuclear reactor, renewed Japanese interest in regional institutions, concern about the US economy, political instability in Japan itself – these are the stuff of current commentary in mid-2011. This, the third edition of this widely used textbook on the International Relations of Japan, gives the reader a firm grasp of the political complexities behind all this. East Asia, as the authors are fully aware, is moving to centre stage, with potential both for solving global problems and for destructive conflict.' Professor J. A. A. Stockwin, former Director, Nissan Institute for Japanese Studies, University of Oxford

'Japan's foreign policy has been undergoing seismic shifts since the second edition of this fine book. A rising China, a now-nuclear North Korea, and an America bogged down in wars in Central Asia and the Middle East are but the most conspicuous of the major new challenges that confront Japanese policymakers. Experts and novices alike will find no deeper or more up-to-date analysis of these subjects than this new edition of Japan's International Relations.' Professor T.J. Pempel, Department of Political Science, University of California, Berkeley, USA

'This book is a tour de force in its encyclopaedic range and in the uniformly outstanding quality of the writing by the four different contributors. It will serve as a ‘one-stop shop’ to understanding the major explanations and interpretations of Japan as an international actor.' Professor Aurelia George Mulgan, University of New South Wales at the Australian Defence Force Academy, Australia