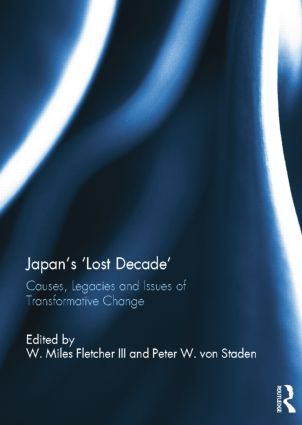 Understanding the 'lost decade' of the 1990s is central to explaining Japan today. Following a period of record high growth, the chronic downturn after 1990 raised fundamental questions about the course of the world's third largest economy. This crisis also presented Japan with the opportunity for transformative change. Changes have followed, some of them less than might be expected, and some of them far more sweeping than is generally realized.

This volume presents a wide range of international perspectives on post-bubble Japan, exploring the effects of the long downturn on the views of the Japanese business community, management practices, and national policies. To what degree has Japan's traumatic experience prompted basic reforms in terms of legal changes, corporate governance, business strategy, and the longterm national vision for the economy?

This book was originally published as a special issue of Asia Pacific Business Review.

1. Introduction: Japan at an inflection point Mark Metzler 2. Dreams of economic transformation and the reality of economic crisis in Japan: Keidanren in the era of the ‘bubble’ and the onset of the ‘lost decade,’ from the mid-1980s to the mid-1990s W. Miles Fletcher III 3. From developmental state to the ‘New Japan’: the strategic inflection point in Japanese business Ulrike Schaede 4. Fettered by the past in the march forward: ideology as an explanation for today’s malaise in Japan Peter von Staden 5. Family and non-family business resilience in an economic downturn Bruno Amann and Jacques Jaussaud 6. Characteristics of R&D expenditures in Japan’s pharmaceutical industry Sophie Nivoix and Pascal Nguyen 7. Leadership and performance in Japanese R&D teams Jun Ishikawa 8. The ownership structure of foreign subsidiaries and the effect of institutional distance: a case study of Japanese firms Naoki Ando 9. Epilogue: retrospect and prospects: the significance of the ‘lost decades’ in Japan W. Miles Fletcher III and Peter W. von Staden

W. Miles Fletcher III is Professor of History at the University of North Carolina-Chapel Hill, USA. His previous work has examined Japanese political and intellectual history during the pre-war period, the history of Japanese trade policy, and the development of the cotton textile industry in modern Japan.

Peter W. von Staden is Senior Lecturer of International Business at Bristol Business School, part of the University of the West of England, UK. His research focuses on government and business relations in modern Japan. His previous work has examined the role of business in political decision-making in the early twentieth century.