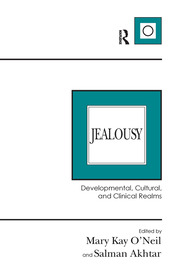 Jealousy is a human feeling experienced by everyone in varying intensities, at different times and phases of growth. Frequently confused, jealousy and envy are often intertwined. Even within the psychoanalytic literature confusion persists and much less has been written about jealousy than envy. However, unlike envy, jealousy involves three entities and affects all people involved. It can be painful as other difficult-to-bear feelings (e.g. shame, guilt anger, hatred) underlie jealousy. Yet, total absence of jealousy renders a person less human, less relational. In analytic terms jealousy is a defense against emotional anguish.

This book begins with an extensive overview of the nature, developmental origins and poignant cultural (especially poetic) allusions to jealousy, emphasizing that it is through artistic expression that a true understanding of this frequently deeply disturbing feeling is achieved. It closes with a thoughtful summary, synthesis and critique of the chapters by 12 distinguished analysts.

Mary Kay O’Neil, PhD, is a supervising and training psychoanalyst who has recently moved from Montreal to Toronto, where she is in private practice. She is the past Director of the Canadian Institute of Psychoanalysis (Quebec, English) and a North American Representative on the Board of the International Psychoanalytical Association. In addition, she has served on a number of IPA committees, including ethics committees at the local, national, and international levels, and on the editorial Board of the International Journal of Psychoanalysis. Dr O’Neil received a PhD from the University of Toronto, where she was an Assistant Professor in the Department of Psychiatry. She completed her psychoanalytic training at the Toronto Institute of Psychoanalysis and is a Registered Psychologist in both Quebec and Ontario. The author of The Unsung Psychoanalyst: The Quiet Influence of Ruth Easser, she co-authored/edited five other books and has contributed numerous professional journal articles as well as chapters and book reviews. Her publications and research include depression and young adult development, emotional needs of sole support mothers, post termination analytic contact, and psychoanalytic ethics. Her research activities have been funded by foundations in Toronto and Montreal.