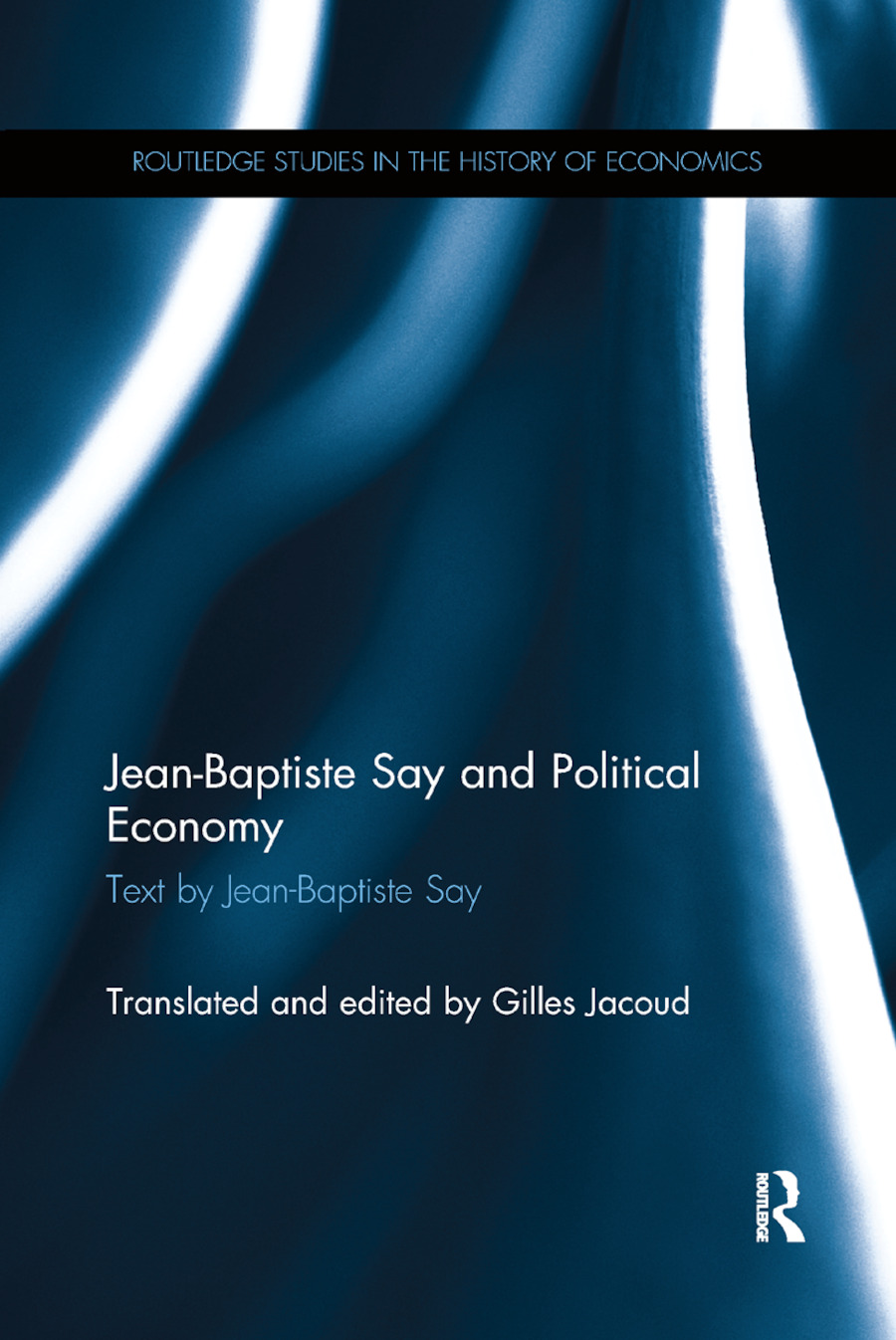 Jean-Baptiste Say (1767–1832) was one of the first great economists to have laid down the foundations of economic science. Author of the famous Treatise on Political Economy in 1803, which was revised and re-edited on several occasions, he published numerous other works including a voluminous Complete Course in Practical Political Economy in 1828–9. He also taught political economy successively from 1815 until his death in three Parisian establishments: the Athénée, the Conservatory of Arts and Trades, and the Collège de France.

The texts in which Say exposes his approach to political economy have not been available in the English language until now except for the fourth edition of the ‘Preliminary Discourse’ which serves as an introduction to the Treatise. This book presents a translation which renders his works accessible to the English speaking world. For the first time, English readers will be able to become directly immersed in Say’s principal texts, where he develops his conception of political economy. Jean-Baptiste Say and Political Economy proposes a translation of a selection of eleven of Say’s texts. The first three are versions of the ‘Preliminary Discourse’ from the Treatise’s editions of 1803, 1814 and 1826 with the variations of the editions of 1817, 1819 and 1841. The following four texts are the opening discourses pronounced at the Conservatory in 1820 and 1828 and the Collège de France in 1831 and 1832. The eighth text is the ‘General Considerations’ which open the Complete Course in Practical Political Economy of 1828, with the variations of the 1840 re-edition. The final three texts are those Say devotes to ‘the progress of political economy’ in what is akin to a history of economic thought.

This volume is of great importance to economic historians and people studying Jean-Baptiste Say, as well as those who are interested in economic theory and philosophy

‘Preliminary discourse’ from A Treatise on Political Economy

3 ‘Preliminary discourse’ from editions 2, 3 and 4 of A Treatise on Political Economy

5 Conservatory of Arts and Trades. Opening discourse of the course in industrial economy, pronounced on the 2nd December 1820

6 Opening discourse of the course in industrial economy. November 1828

7 Collège de France. Opening discourse of the course on political economy of the 1831–1832 school year

8 Opening discourse of the course on political economy, pronounced by the author shortly before his death, for the beginning of the 1832–1833 school year

‘General considerations’ from the Complete Course in Practical Political Economy

9 ‘General considerations’ from the Complete Course in Practical Political Economy

10 An historical sketch of the progress of political economy

11 An abridged history of the progress of political economy

Gilles Jacoud is Professor of Economics at the University of Saint-Étienne, France. He is the author of several books and articles on money and banking and on the history of economic thought.