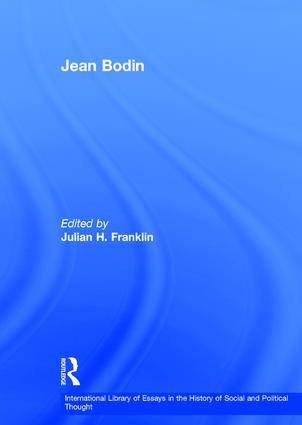 In the course of a lifetime, Jean Bodin aimed at nothing less than to encompass all the disciplines of his age in a huge encyclopedia of knowledge. In many areas, his ideas have been not only original but seminal. He made major contributions to historiography, philosophy of history, economics, political science, comparative public law and policy, religion and national philosophy. This volume brings together a selection of major articles in English, representing almost all of his intellectual interests. It is an essential collection for libraries and scholars in both humanities and social sciences.

'…the value of Franklin's book is considerable. It certainly fills a gap in secondary texts, and will serve, if not indeed help generate, future interest and scholarship by making accessible the best available work on Bodin…' Political Studies Review '…the greatest contribution of Franklin's Jean Bodin is thus to bring together in a single volume a collection of essays conveying the encyclopedic scope of Bodin's project, addressing his accomplishments and shortcomings, and discussing the controversies that continue to surround his ideas. In this respect , the volume is a very Bodinian book. Much like Bodin's writings, it demonstrates the value of assembling in a single work essays on a multiplicity of different subjects from diverse perspectives.' H-France, Vol 7, August 2007

Julian H. Franklin is Professor Emeritus of Political Science at Columbia University, USA. His primary field was the history of political thought with emphasis on absolutism and constitutionalism in the sixteenth and seventeenth centuries. He has published two books on the thought of Jean Bodin, one book on John Locke and one on animal rights. He is also teaching an undergraduate course on animal rights in Columbia College as an Adjunct Professor.