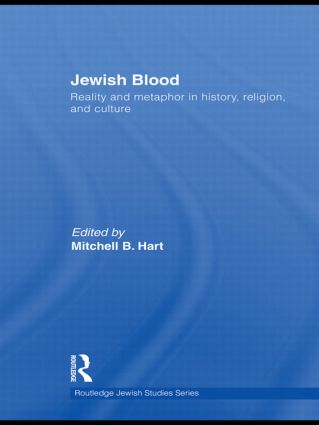 Reality and metaphor in history, religion and culture, 1st Edition

This book deals with the Jewish engagement with blood: animal and human, real and metaphorical. Concentrating on the meaning or significance of blood in Judaism, the book moves this highly controversial subject away from its traditional focus, exploring how Jews themselves engage with blood and its role in Jewish identity, ritual and culture.

With contributions from leading scholars in the field, the book brings together a wide range of perspectives and covers communities in ancient Israel, Europe and America, as well as all major eras of Jewish history: biblical, Talmudic, medieval and modern. Providing historical, religious and cultural examples ranging from the "Blood Libel" through to the poetry of Uri Zvi Greenberg, this volume explores the deep continuities in thought and practice related to blood. Moreover, it examines the continuities and discontinuities between Jewish and Christian ideas and practices related to blood, many of which extend into the modern, contemporary period. The chapters look at not only the Jewish and Christian interaction, but the interaction between Jews and the individual national communities to which they belong, including the complex appropriation and rejection of European ideas and images undertaken by some Zionists, and then by the State of Israel.

This broad-ranging and multidisciplinary work will be of interest to students of Jewish Studies, History and Religion.

'The varied subjects of the different essays amply ful!ll Hart’s promise to describe how blood functions culturally for Jews. The essays are almost all of high quality and well worth reading. It is especially helpful to have essays addressing ritual practices (Biale, Swartz, Surowitz, Robinson) together with those offering an emphasis on textual themes.' - James W. Watts, Syracuse University (USA); RELIGION, volume 41, issue 1 (March 2011)

1. "Jewish Blood": An Introduction Mitchell B. Hart 2. Blood and Belief: An Introduction to a Jewish Symbol David Biale 3. We Have Never Been Jewish: An Essay in Asymmetric Hematology Gil Anidjar 4. "By the Blood That You Shed You are Guilty": Perspectives on Female Blood in Leviticus and Ezekiel Elizabeth W. Goldstein 5. The Topography of Blood in 'Mishnah Yoma' Michael D. Swartz 6. God Will See the Blood: Sin, Punishment, and Atonement in the Jewish-Christian Discourse Israel J. Yuval 7. Pharaoh’s Bloodbath: Medieval European Jewish Thoughts about Leprosy, Disease, and Blood Therapy Ephraim Shoham-Steiner 8. The Blood Libel in Solomon ibn Verga’s 'Shevet Yehudah' Jeremy Cohen 9. The Symbolic Power of Blood-Letting: Bernard Picart’s 'La Circoncision des Juifs Portugais' Hilit Surowitz 10. Blood and Myth in the Thought of Franz Rosenzweig Hagai Dagan 11. "Man’s Red Soup": Blood and the Art of Esau in the Poetry of Uri Zvi Greenberg Neta Stahl 12. The "Blood Motif" in the Struggle for Political Recognition: Zionist "Dissidents" Contest Exclusion Udi Lebel 13. 'Mezizah': the Controversy Over the Manner of Dealing with Circumcision Blood Among Contemporary Orthodox Jews Ira Robinson

Mitchell B. Hart is an associate professor of Jewish history at the University of Florida in Gainesville. He is the author of The Healthy Jew: The Symbiosis of Judaism and Modern Medicine (2007) and Social Science and the Politics of Modern Jewish Identity (2000). He is currently at work on a reader about Jews and race.