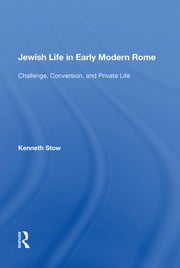 The essays in this second volume by Kenneth Stow explore the fate of Jews living in Rome, directly under the eye of the Pope. Most Roman Jews were not immigrants; some had been there before the time of Christ. Nor were they cultural strangers. They spoke (Roman) Italian, ate and dressed as did other Romans, and their marital practices reflected Roman noble usage. Rome's Jews were called cives, but unequal ones, and to resolve this anomaly, Paul IV closed them within ghetto walls in 1555; the rest of Europe would resolve this crux in the late eighteenth century, through civil Emancipation. In its essence, the ghetto was a limbo, from which only conversion, promoted through "disciplining" par excellence, offered an exit. Nonetheless, though increasingly impoverished, Rome's Jews preserved culture and reinforced family life, even many women's rights. A system of consensual arbitration enabled a modicum of self-governance. Yet Rome's Jews also came to realize that they had been expelled into the ghetto: nostro ghet, a document of divorce, as they called it. There they would remain, segregated, so long as they remained Jews. Such are the themes that the author examines in these essays.

Contents: Introduction; Part 1 The Papal Challenge: The burning of the Talmud in 1553, in the light of 16th century Catholic attitudes toward the Talmud; The consciousness of closure: Roman Jewry and its ghet; Expulsion Italian style: the case of Lucio Ferraris; The good of the Church, the good of the state: the Popes and Jewish money. Part 2 In Search of Conversion: Church, conversion and tradition: the problem of Jewish conversion in 16th century Italy; A tale of uncertainties: converts in the Roman ghetto; Neofiti and their families, or perhaps, the good of the state; Delitto e castigo nello stato della chiesa: gli ebrei nelle carceri romane dal 1572 al 1659. Part 3 The Jews of Rome: Prossimità o distanza: etnicità, sefarditi e assenza di conflitti etnici nella Roma del sedicesimo secolo; Ethnic rivalry or melting pot: the 'edot' in the Roman ghetto; Ethnic amalgamation, like it or not: inheritance in early modern Jewish Rome; Abramo ben Aaron Scazzocchio, another kind of Rabbi; The knotty problem of Shem Tov Soporto: male honor, marital initiation, and disciplinary structures in mid-16th-century Jewish Rome; The new fashioned from the old: parallels in public and learned memory and practice in 16th century Jewish Rome; Corporate double talk: Kehillat Kodesh and Universitas in the Roman Jewish 16th century environment; Marriages are made in heaven: marriage and the individual in the Roman Jewish ghetto; Writing in Hebrew, thinking in Italian; Jewish pre-emancipation: ius commune, the Roman communità, and marriage in the early modern Papal State; Index.