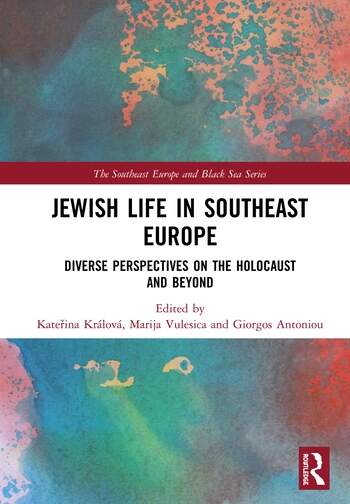 Jewish Life in Southeast Europe: Diverse Perspectives on the Holocaust and Beyond

This anthology brings together eight chapters which examine the life of Jews in Southeast Europe through political, social and cultural lenses. Even though the Holocaust put an end to many communities in the region, this book chronicles how some Holocaust survivors nevertheless tried to restore their previous lives.

Focusing on the once flourishing and colorful Jewish communities throughout the Balkans – many of which were organized according to the Ottoman millet system – this book provides a diverse range of insights into Jewish life and Jewish-Gentile relations in what became Greece, Yugoslavia, Romania and Bulgaria after World War II. Further, the contributors conceptualize the issues in focus from a historical perspective. In these diachronic case studies, virtually the whole 20th century is covered, with a special focus paid to the shifting identities, the changing communities and the memory of the Holocaust, thereby providing a very useful parallel to today’s post-war and divided societies.

Drawing on relevant contemporary approaches in historical research, this book complements the field with topics that, until now in Jewish studies and beyond, remained on the edge of the general research focus.

This book was originally published as a special issue of Southeast European and Black Sea Studies.

Introduction – diverse perspectives on Jewish life in Southeast Europe: the Holocaust and beyond

2. Antisemitism as political theology in Greece and its impact on Greek Jewry, 1967–1979

3. Voices from the ghetto of Thessaloniki: mother–son correspondence as a source of Jewish everyday life under persecution

4. From salvation to Alya: the Bulgarian Jews and Bulgarian-Israeli relations (1948–1990)

5. Rebuilding the community: the Federation of Jewish Communities and American Jewish humanitarian aid in Yugoslavia, 1944–1952

6. ‘Being traitors’: post-war Greece in the experience of Jewish partisans

7. Memorialization of the Holocaust in Transylvania during the early post-war period

is an Assistant Professor and Head of the Department of Russian and Eastern European Studies at Charles University, Prague, Czech Republic. Her research focuses on reconciliation with the Nazi past, the Holocaust and its aftermath. She is currently working on a book about Holocaust survivors in Greece.

is a Researcher at the Center for Research on Antisemitism at the TU Berlin, Germany. She is the author of numerous articles on antisemitism, the Holocaust and Jews in Southeastern Europe. She is currently working on a book about Yugoslav Zionists and the transnational networks established to help Central European Jews escape Nazi persecution.

is Assistant Professor of Jewish Studies at the Aristotle University of Thessaloniki, Greece, as well as a former Research Fellow at the Foundation for the Memory of the Shoah in Paris, France, and a Visiting Lecturer at Yale University, USA. His research includes post-conflict societies, the Holocaust in Greece, collective memory and public history.