Jewish Workers and the Labour Movement
A Comparative Study of Amsterdam, London and Paris 1870-1914 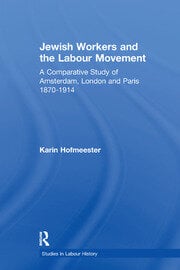 Jewish Workers and the Labour Movement: A Comparative Study of Amsterdam, London and Paris 1870-1914

During the late nineteenth century, many Jewish workers and intellectuals considered their integration into the general labour movement as a good way to counter the double disadvantage they suffered in society as Jews and workers. Whilst in Amsterdam this process encountered few obstacles, it was more problematical in London and Paris. Through a detailed examination of the collaborative efforts of Jewish labour in these three cities, Jewish Workers and the Labour Movement reveals the multi-layered and unique position of Jewish workers in the labour market. It shows how various factors such as economic change, political upheaval, state intervention and anti-Semitism all affected the pace of integration, and draws conclusions that highlight the similarities as well as the differences between the efforts of Jewish workers to improve their lot in France, Britain and Holland.

Contents: Introduction; Part 1 Amsterdam: The social status of Jewish workers in Amsterdam; Relations between Jews and non-Jews in the early labour movement; A Jewish social-democratic club and the first Jewish members of the SDB; Jewish workers see the light; A new Jewish trade union and the rise of Jewish membership in general organizations; Joint organization, but what about integration?; Jewish interests in the general movement and justification for specifically Jewish labour organizations. Part 2 London: From greeners to settlers: arrival, reception and everyday life in the East End; The first Jewish socialist organization in the world; Two newspapers, a club and several trade unions: the rise of the Jewish labour movement; Reactions to the arrival and presence of the Jewish immigrants; The first major campaigns, and the first efforts to join forces; The English trade unions demand immigration restrictions; The Boer War, nationalism, anti-semitism and the adoption of the Aliens Act; The rise of the Jewish labour movement: the start of integration; Working together proves difficult; Integration put to the test and consolidated; Part 3 Paris: 'Lebn vi got in Frankraykh': arrival, reception and everyday life in Paris; Responses to the arrival and presence of the Jewish immigrants; Political discussions at the café; the origins of the Jewish labour movement; The Dreyfus affair and relations between the Jewish and French labour movements; The joint struggle against anti-semitism and the first Jewish unions; The establishment of Jewish branches of French trade unions; The Intersektsionen Byuro is established; Jewish branches and trade unions and their interaction with French unions. Amsterdam, London and Paris: a comparison; Bibliography; Index.

'The latest offering in Ashgate's excellent 'Studies in Labour History' series [...] is an important contribution to European labor history... This book succeeds on many levels... a valuable contribution to historical labor literature, a model of good scholarship and a pleasure to read.' Labor History '... this is an important and engaging study... the clarity of purpose displayed and the work's lucid style make for a compelling read. For those business historians with an interest in labour and its organisation, this tale of three cities contains much food for thought.' Business History 'Karin Hofmeester has given us a detailed picture of the social structure, work and play of her three communities. Her conscientious research is commendable.' The London Journal