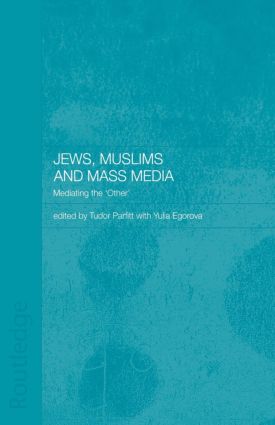 Mediating the 'Other', 1st Edition

This text looks at the ways in which Jews, Muslims and the conflict between them has been covered in the modern media. Both Jews and Muslims generally receive a 'bad press'. This book will try to reveal why. The media have clearly played a pro-active role in the Middle East conflict, the coverage of which is obscured by the contrasting images of Jew and Muslim in western thought.

Introduction Part 1: Jews and Muslims: Portraying Communities 1. Christian 'Intruders', Muslim 'Bigots': The Egyptian-Syrian Press Controversy in the Late Nineteenth-Century Cairo Ami Ayalon 2. Zionism, Jews and Muslims in the Ottoman Empire as Reflected in the Weekly Hamevasser Aryeh Shmuelevitz 3. Mediating the 'Other' through Advertisements Arus Yumul 4. From Judeophobia to Islamophobia in the Italian Media, with a Special Focus on the Northern League Party Media Emanuela Trevisan-Semi 5. Minorities and Press in Post-Revolution Iran Ali Granmayer 6. Imag(in)ing Europe: The Theme of Emigration in North African Cinema Roy Armes 7. Representing the Muslim: The 'Courtesan Film' in Indian Popular Cinema Rachel Dwyer 8. Jewish Themes in the Press of Independent India Yulia Egorova Part 2: Mass Media and the Conflict in the Middle East 9. In the Eyes of the Beholder: Israel, Jews and Zionism in the Iraqi Media Ofra Bengio 10. The Image of Jews and the State of Israel in Eastern Bloc Media Angelika Timm 11. The Portrayal of Palestinian Arabs in the Moscow Yiddish Monthly Sovetish Heymland Gennady Estraikh 12. Arab.Ru: The Virtual Other in the Israeli-Russian Web Mikhail and Anna Krutikov 13. Reading The Guardian: Jews, Israel-Palestine and the Origins of Irritation Colin Shindler 14. Facing and defacing the 'Other'. Israel Television's Live Representation of Arabs in Ceremonies and Disaster Marathons Tamar Liebes 15. Are They Still the Enemy? The Representation of Arabs in Israeli TV News Anat First 16. Approaches to Peacemaking in the Israeli Press Michael Keren 17. Argument, War and the Role of the Media in the Conflict Management Marcelo Dascal

Yulia Egorova received her doctorate from the School of Oriental and African Studies, London University. At the moment she is a Research Fellow at Cardiff University. Her research interests focus on conceptual implications of science including the impact of genetic anthropological studies conducted in India and among different Jewish communities of the world.