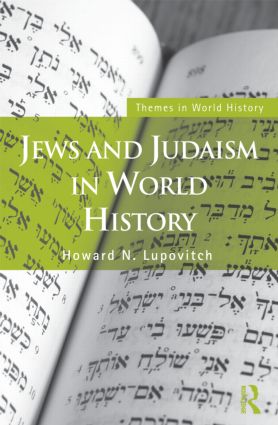 Jews and Judaism in World History

This book is a survey of the history of the Jewish people from biblical antiquity to the present, spanning nearly 2,500 years and traversing five continents.

Opening with a broad introduction which addresses key questions of terminology and definition, the book’s ten chapters then go on to explore Jewish history in both its religious and non-religious dimensions. The book explores the social, political and cultural aspects of Jewish history, and examines the changes and continuities across the whole of the Jewish world throughout its long and varied history. Topics covered include:

'…a welcome and helpful introduction for the non-specialist.' – Journal of Jewish Studies

Introduction: Dimensions of Jewish History 1. The World of the Hebrew Bible 2. The Challenge of Hellenism 3. The Rise of Rabbinic Judaism 4. The Jews of Islam 5. The Jews of Medieval Christendom 6. World Jewry in Flux, 1450–1750 7. The Age of Enlightenment and Emancipation 8. Anti-Semitism and Jewish Responses, 1870–1914 9. Renewal and Devastation, 1918–1945 10. The Post-War World. Conclusion. Bibliographic Essay: Suggestions for Further Reading

Howard N. Lupovitch is the Waks Family Associate Professor of Jewish History at the University of Western Ontario. He is the author of Jews at the Crossroads: Tradition and Accommodation during the Golden Age of the Hungarian Nobility (2007)