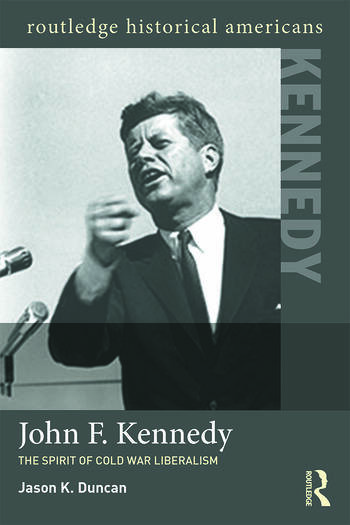 Half a century after his assassination, John F. Kennedy continues to evoke widespread fascination, looming large in America’s historical memory. Popular portrayals often show Kennedy as a mythic, heroic figure, but these depictions can obscure the details of the president’s actual achievements and challenges. Despite the short length of his time in office, during his presidency, Kennedy dealt with many of the issues that would come to define the 1960s, including the burgeoning Cold War and the growing Civil Rights movement.

In John F. Kennedy: The Spirit of Cold War Liberalism, Jason K. Duncan explains Kennedy’s significance as a political figure of the 20th century in U.S. and world history. Duncan contextualizes Kennedy’s political career through his personal life and addresses the legacy the president left behind. In a concise narrative supplemented by primary documents, including presidential speeches and critical reviews from the left and right, Duncan builds a biography that elucidates the impact of this iconic president and the history of the 1960s.

Introduction  Part I: John F. Kennedy 1. Ancient Heritage 2. Tempered by War 3. A Hard and Bitter Peace 4. The Torch is Passed 5. Though Embattled We Are 6. Across the Globe 7. At Home 8. A Long Twilight Struggle  Part II: Documents  Notes Bibliography Index

"In this sparkling short biography, Jason Duncan provides an exceptionally balanced view of John Kennedy. This gem-like book shows how Kennedy's many travels shaped his later presidency, including the founding of the Peace Corps. On each aspect of Kennedy's life, Duncan clearly and concisely presents both sides before deftly offering his own conclusion."

– William J. Rorabaugh, author of The Real Making of the President: Kennedy, Nixon, and the 1960 Election

"First the Kennedy life, then the myth, then the revisionism. Only now, a half-century on, do we have the distance required to put the thirty-fifth president into perspective. Jason Duncan has given us an insightful, accessible account of Kennedy and his era, reminding us what he accomplished and why it matters."

– H.W. Brands, author of American Dreams: The United States since 1945

"Professor Duncan's concise but absorbing biography of one of America's most unforgettable presidents offers students a rich and well balanced understanding of Kennedy's heritage, achievements, failings, and legacy.  Especially insightful are its treatments of his emergence as a national figure, his efforts to manage conflicting traditions and pressures, and his handling of a critical stage in the Cold War."

– Ellis W. Hawley, author of The Great War and the Search for a Modern Order