John II Komnenos, Emperor of Byzantium
In the Shadow of Father and Son 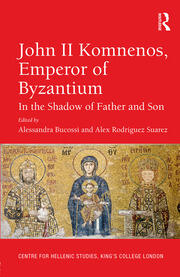 John II Komnenos, Emperor of Byzantium: In the Shadow of Father and Son

The Emperor John II Komnenos (1118–1143) has been overshadowed by both his father Alexios I and his son Manuel I. Written sources have not left us much evidence regarding his reign, although authors agree that he was an excellent emperor. However, the period witnessed territorial expansion in Asia Minor as well as the construction of the most important monastic complex of twelfth-century Constantinople. What else do we know about John’s rule and its period? This volume opens up new perspectives on John’s reign and clearly demonstrates that many innovations generally attributed to the genius of Manuel Komnenos had already been fostered during the reign of the second great Komnenos. Leading experts on twelfth-century Byzantium (Jeffreys, Magdalino, Ousterhout) are joined by representatives of a new generation of Byzantinists to produce a timely and invaluable study of the unjustly neglected figure of John Komnenos.

Alessandra Bucossi is research fellow at Ca' Foscari University of Venice, Italy. She worked as a Sophia Research Fellow in Byzantine Studies at KCL between 2011 and 2014. She studied Classics at the University of Genova and was awarded an MA in Late Antique and Byzantine Studies at King's. She holds a doctorate from Oxford University and a Diploma in Greek Palaeography from the Vatican School of Greek Palaeography. Before KCL she was Fellow at Dumbarton Oaks and Research Fellow in the Ars edendi research programme based at Stockholms Universitet.

Alex Rodriguez Suarez received his doctorate in the Centre for Hellenic Studies at King's College London in 2014. He studied History at the Universitat Autonoma of Barcelona and was awarded an MA in Late Antique and Byzantine Studies at Royal Holloway University of London.