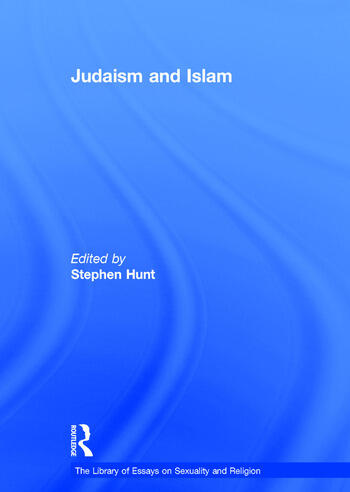 This volume on Judaism and Islam in The Library of Essays on Sexuality and Religion series overviews perceptions of human sexuality through two major monotheistic faiths, namely Judaism and Islam. Part 1 presents previously published articles on Judaism and sexuality from a historical perspective, in particular, through the writings of the Tanakh and traditional Judaic attitudes. Part 2 focuses more cogently on contemporary themes including both the contestation and defence of conventional Jewish standpoints on sexuality via orthodox and liberal renderings of the faith. Part 3 includes articles examining Islamic views of sexuality from a historical perspective. Here there is a special focus on the faith's construction of sexual categories, as well as the relationship between sexuality, gender and patriarchy. Part 4 takes a cross-cultural and global perspective of the subject with a particular emphasis on the connection between sexuality and moral regulation, besides scrutinising varying and contrasting cultural attitudes in Islamic communities today.

Contents: Introduction; Judaism: Part I Judaism and Sexuality: Exploring Historical Viewpoints: Are there any Jews in 'the history of sexuality'?, Daniel Boyarin; The Song of Songs and the Garden of Eden, Francis Landy; The One: God's unity and genderless divinity in Judaism, Hagar Lahav; Gender and sexuality in the Garden of Eden, Jerome Gellman; The hole in the sheet and other myths about sexuality and Judaism, David S. Ribner and Peggy J. Kleinplatz. Part II Judaism and Sexuality: the Traditional-Modernist Divide: Lived regulations, systemic attributions: menstrual separation and ritual immersion in the experience of Orthodox Jewish women, Tova Hartman and Naomi Marmon; Observance of the laws of family purity in modern-orthodox Judaism, Mark A. Guterman; Jewish women and sexuality, Judi Keshet-Orr; Of pearls and fish: an analysis of Jewish legal texts on sexuality and their significance for contemporary American Jewish movements, Rachel Sara Rosenthal; Homosexuality and the Orthodox Jewish community, Marc Angel, Hillel Goldberg and Pinchas Stolper. Islam: Part III Islam and Sexuality in Historical Context: She's upright: sexuality and obscenity in Islam, A.E. Souaiaia; Gender boundaries and sexual categories in the Arab world, As'ad AbuKhalil; The Sharia, Islamic family laws and international human rights law: examining the theory and practice of polygamy and talaq, Javaid Rehman; Islamic female sexuality and gender in modern feminist interpretation, Elizabeth Shlala Leo; Migration challenges views on sexuality, Nader Ahmadi. Part IV Islam and Sexuality in Global Perspective: 'He is your garment and you are his ...': religious precepts, interpretations, and power relations in marital sexuality among Javanese Muslim women, Lily Zakiyah Munir; Sexuality in contemporary Arab society, Abdessamad Dialmy; Zina and the moral regulation of Pakistani women, Shahnaz Khan; Sexuality and the moral 'construction' of women in an Islamic society, Janet L. Bauer; Negotiating spa