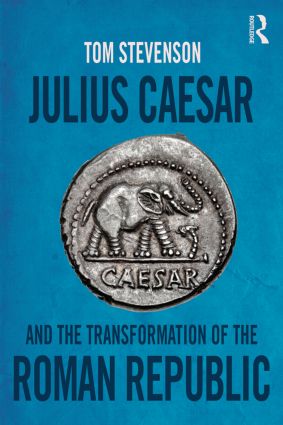 Julius Caesar and the Transformation of the Roman Republic

Julius Caesar and the Transformation of the Roman Republic provides an accessible introduction to Caesar’s life and public career. It outlines the main phases of his career with reference to prominent social and political concepts of the time. This approach helps to explain his aims, ideals, and motives as rooted in tradition, and demonstrates that Caesar’s rise to power owed much to broad historical processes of the late Republican period, a view that contrasts with the long-held idea that he sought to become Rome’s king from an early age. This is an essential undergraduate introduction to this fascinating figure, and to his role in the transformation of Rome from republic to empire.

*A CHOICE Outstanding Academic Title of 2015*

"Stevenson intended his book as an introduction to the career and legacy of Julius Caesar for general readers and undergraduates, but he achieved much more. His concise, well informed review of the sources on and issues about the most famous Roman is well organized, and his review of the scholarship is excellent. Stevenson’s analysis of Caesar’s political career is on target…This book is the best introduction to Julius Caesar for scholars and students. Summing Up: Essential. All levels/libraries." - K.W. Harl, Tulane University, CHOICE

"An excellent introduction to the life of Julius Caesar against the background of the late Republic. It covers the issues normally raised in teaching the subject, introduces the reader to the evidence and the positions taken by modern historians, and points out the misunderstandings to which one-sided interpretations may lead. It is admirable for the swift and sure way it covers difficult ground." Andrew Lintott, University of Oxford, UK

"Julius Caesar and the Transformation of the Roman Republic is an excellent beginner’s biography of Caesar. By balancing the important socio-political developments of the first century BCE with a biography of Caesar, Stevenson guides the reader through a pivotal period in Roman history. With a strong focus on Caesar’s political career, Stevenson’s monograph is a welcome contribution to the core reading of any course concerning Caesar or the end of the Roman Republic. More informed readers will critically engage with the main thesis of the book, which argues that Caesar never actively sought kingship in order to supplant the conservative oligarchy… [It] is excellently pitched for undergraduates and general readers; it is clearly presented, well mapped, and maintains a clear and consistent thesis – a further lesson for students to emulate… Ultimately this book will be a staple of future reading lists concerning Caesar and the end of the Roman Republic." Bryn Mawr Classical Review

Tom Stevenson is Senior Lecturer in Classics and Ancient History at the University of Queensland, Australia.