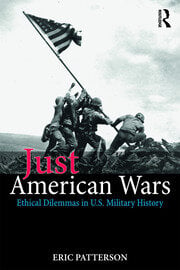 This book examines the moral choices faced by U.S. political and military leaders in deciding when and how to employ force, from the American Revolution to the present day.

Specifically, the book looks at discrete ethical dilemmas in various American conflicts from a just war perspective. For example, was the casus belli of the American Revolution just, and more specifically, was the Continental Congress a "legitimate" political authority? Was it just for Truman to drop the atomic bomb on Japan? How much of a role did the egos of Kennedy, Johnson and Nixon play in prolonging the Vietnam War? Often there are trade-offs that civilian and military leaders must take into account, such as General Scott’s 1847 decision to bombard the city of Veracruz in order to quickly move his troops off the malarial Mexican coast. The book also considers the moral significance and policy practicalities of different motives and courses of action. The case studies provided highlight the nuances and even limits of just war principles, such as just cause, right intention, legitimate authority, last resort, likelihood of success, discrimination, and proportionality, and principles for ending war such as order, justice, and conciliation.

This book will be of interest for students of just war theory, ethics, philosophy, American history and military history more generally.

1. Just American Wars? From Lieber’s Code to the Cold War and Beyond

Section 1: The Ethics of Going to War

3. When is Enough Enough? Last Resort and Likelihood of Success in the War of 1812

4. Dominos, Ego, and National Honor: The Ethics of Going to, and Prolonging, the Vietnam War

Section 2: The Ethics of How War is Fought

5. The Texas Rangers, Yellow Jack, and Veracruz: Proportionality and Discrimination in the Mexican-American War

6. Truman, Hiroshima, and Contemporary Nuclear Issues: The Intersection of Jus ad Bellum and Jus in Bello

Section 3: Bringing War to a Morally and Politically Satisfying End

7. The Taft Commission in Manila: Political Order, Justice, and Conciliation after the Spanish American War

8. Vindication or Vengeance in 1919? The Contrasting Policies of Wilson, Clemenceau, and Lloyd George

9. The Morality of Victory in Contemporary Warfare

Eric Patterson is Dean of the School of Government at Regent University and a Research Fellow at Georgetown University’s Berkley Center for Religion, Peace, and World Affairs, U.S.A. He is the author or editor of over a dozen books, including Ending Wars Well (2012) and Philosophers on War (2017).

"This is the book that scholars interested in the ethics of war have been waiting for. It brings the just war tradition to life by showing both how it was debated and contested by political and military leaders as they grappled with the major conflicts of their day, and how it shaped those very conflicts. This is a superb book, and a welcome addition to the field."--Cian O'Driscoll, University of Glasgow, UK

"Patterson’s work provides a thorough, reflective, and thought-provoking study. Drawing upon decades of scholarship and military service he overlays the moral and ethical framework of the just war tradition on historical case studies of America’s wars providing a remarkable historical, political, and ethical analysis. In viewing these wars he clearly illustrates the continuum of principle-policy-practice. In so doing he provides readers across many disciplines with a timely work that reminds citizens, policymakers, and political leaders that values have consequences not only in the lives of people, but in the lives of nations."-- Timothy Demy, Naval War College, US

"The author writes with wit, clarity, and grace about dimensions of American wars and war-making that are often neglected or poorly understood. With respect to war’s three dimensions – declaration, conduct, and conclusion – Dr. Patterson offers highly original perspectives on American war-making and war-fighting from the American Revolution to the 'second' Gulf War in Iraq. Whether in the observance or in the breach, this high moral standard plays an essential role in the history of American warfare, as this splendid treatment makes abundantly clear."--George Lucas, US Naval Academy

''Students may not realize the debates they have in the classroom can have real consequences later, but Just American Wars can direct their discussions and shape their thinking so that if forced to make critical decisions under stress, they will have a firm-enough ethical foundation to make wiser choices. In this way, Patterson’s work may continue the unique American way of war, to the world’s benefit.''--Mark Melton, Providence

''Though this is a book that examines all these wars, it is ultimately more a book about just war: specifically, the ongoing persistence of just war ideas through history, their use by Americans in times of crisis, and the effects of these ideas seen through America’s wars. As such, it serves to remind readers that just war reasoning is more than an abstract construct of philosophers, theologians, or lawyers to be imposed from outside on conflicts when they arise. Rather, it is an integral element in the underlying moral fabric on which American political community rests, ready to be accessed in times of crisis.''--James Turner Johnson, Providence