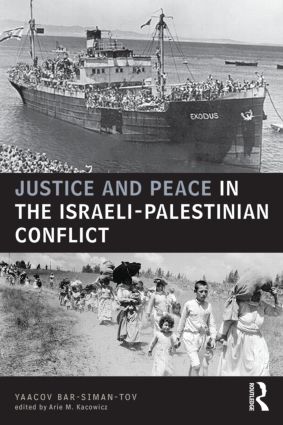 Justice and Peace in the Israeli-Palestinian Conflict

In this book, the late Prof. Yaacov Bar-Siman-Tov argues that the failure of the Israeli-Palestinian peace process so far has been mainly the result of the inability of both sides to reach an agreed formula for linking justice to peace.

The issues of justice and injustice are focused mainly on the outcomes of the 1947-1949 first Arab-Israeli War and specifically in the creation of the Palestinian refugee problem. The conflicting historical narratives of the two sides regarding the question of responsibility for the injustice done to the Palestinians turn the Israeli-Palestinian conflict into a classic case of linking the issues of justice and peace.Yaacov Bar-Siman-Tov maintains that the narratives of justice and injustice in the Israeli-Palestinian conflict have proved to be formidable barriers to peace. Hence, he recommends that justice should be compromised for the sake of peace.

The link between justice and peace is an important issue requiring both sides’ attention, but, given the wide and currently unbridgeable gap separating the two sides, it should be postponed to the phase of reconciliation rather than being included in the process of conflict resolution. The two-state solution is endorsed as the best and practical solution and as a first step for a "just peace" in this conflict, to be followed by reconciliation. Highly topical, this book is essential reading for scholars and researchers of International Relations, Peace Studies and the Arab-Israeli conflict.

This book represents a lifetime of wisdom in dealing with the most basic issues of the conflict between Israelis and Palestinians. It is a fitting tribute to a career devoted to finding ways out of the impasse and remarkable in its ability to encompass the narratives of both parties. It should be required reading not only in courses on the conflict itself, but in any course concerned with issues of justice and peace in seemingly intractable confrontations.

University of Notre Dame, former President of the Association for Israel Studies

Yaacov Bar-Siman-Tov was Giancarlo Elia Valori Professor of International Relations for the Study of Peace and Regional Cooperation- at the Hebrew University of Jerusalem, and the Head of the Jerusalem Institute for Israel Studies. He was also the founding Director of the Swiss Center for Conflict Research, Management and Resolution at the Hebrew University. A noted expert in the fields of conflict management and resolution and the Arab-Israeli conflict, he was the author of several books, including; Israel and the Peace Process, 1977-1982: In Search of Legitimacy for Peace (1994); The Transition from War to Peace: The Complexity of Decisionmaking - The Israeli Case (1996). He was also the editor and co-editor of several books. Among them: Stable Peace Among Nations (2000); From Conflict Resolution to Reconciliation (2004); The Israeli-Palestinian Conflict: From Conflict Resolution to Conflict Management (2007); and Barriers to Peace in the Israeli-Palestinian Conflict (2010).

is the Chaim Weizmann Chair in International Relations and an Associate Professor at the Department of International Relations at the Hebrew University of Jerusalem. He is the author of Peaceful Territorial Change (1994); Zones of Peace in the Third World: South America and West Africa in a Comparative Perspective (1998); The Impact of Norms in International Society: The Latin American Experience, 1881-2001 (2005); and Globalisation and the Distribution of Wealth: The Latin American Experience, 1982-2008 (2013). His areas of interest include globalisation and global governance, international relations of Latin America, peace studies, and the Arab-Israeli conflict.