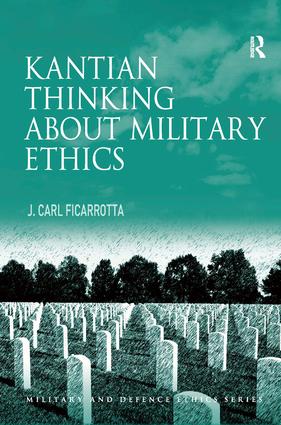 Kantian-inspired approaches to ethics are a hugely important part of the philosophical landscape in the 21st century, yet the lion's share of the work done in service of these approaches has been at the theoretical level. Moreover, when we survey writing in which Kantian-inspired thinkers address practical ethical problems, we do not often enough find sustained attention being paid to issues in military ethics. This collection presents a sampling of how an ethicist who takes Kantian commitments seriously addresses controversial questions in the profession of arms. It examines some of the less frequently studied topics within military ethics such as women in combat, military careerism, homosexuality, teaching bad ethics, immoral wars, collateral damage and just war theory. Presenting philosophical thinking in an easy to understand style, the volume has much to offer to a military audience.

'Recent events - 9/11, Iraq, Afghanistan - have caused an explosion of interest in military ethics. Carl Ficarrotta has put together a very interesting book which examines these issues from a coherent and important Kantian perspective, i.e. a perspective which defends universal human rights and affirms global moral responsibilities. Especially impressive, and timely, are the chapters on the moral equality of soldiers and collateral civilian casualties.' Brian Orend, University of Waterloo, Canada 'Ficarrotta has written a provocative book covering a wide variety of controversial issues in military ethics. Agree with him or not, this reader-friendly book helps clear one's mind. It is a must read for all with an interest in military ethics.' Nick Fotion, Emory University, USA 'Carl Ficarrotta combines deep and long acquaintance with the US military with a rigorously philosophical mind to produce a book of depth and precision. He challenges unquestioned assumptions and illuminates controversial issues.' Martin L. Cook, United States Naval War College, USA 'An important, carefully reasoned, and stimulating contribution to the field of military ethics.' Bill Rhodes, President of the International Society for Military Ethics(ISME) and author of An Introduction to Military Ethics: A Reference Handbook 'Those who are not attracted to Kant's philosophy will still find the discussion valuable. Ficarrotta's arguments are also informed by his first-hand knowledge of America's armed forces (he served as Professor of Philosophy at the United States Air Force Academy). The issues addressed are timely and of great practical concern… While rigorous and scholarly, the presentation style is informal and the material is readily accessible to a general audience. In sum, Ficarrotta has produced one of those rare works that functions well as a primer but at the same time makes an original and important contribution to the field.' Political Studies Review

Contents: Preface; Are military professionals bound by a higher moral standard? Functionalism and its limits; Women in combat: discrimination by generality; Careerism in the military services: an analysis of its nature, why it is wrong, and what might be done about it; Homosexuality and military service: a case for abandoning 'don't ask, don't tell'; How to teach a bad military ethics course; Should members of the military fight in immoral wars? A case for selective conscientious objection; Does the doctrine of double effect justify collateral damage? A case for more restrictive targeting policies; Just war theory triumphant … and doing more harm than good; References; Index.