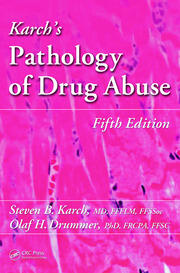 Written in the same accessible manner as previous editions, the fifth edition of Karch’s Pathology of Drug Abuse is an essential guide to the pathology, toxicology, and pharmacology of commonly abused drugs. The book focuses on the investigation of drug-related deaths, practical approaches to the detection of drug abuse, and discussions of medical complications associated with each of the abused drugs.

Steven B. Karch also discusses the book in a

Appendix F: Collecting and Documenting Pills from the Scene of a Death

Steven B. Karch, MD, received his medical degree from Tulane University in New Orleans and did postgraduate training in neuropathology at The Royal London Hospital and in cardiac pathology at Stanford University. He is a fellow of the Faculty of Forensic and Legal Medicine of the Royal College of Physicians of London and a fellow of the Forensic Science Society. He has also been active in The Royal Society of Medicine since his election as a Wellcome fellow in 1972. He is the author of nearly 100 papers and book chapters, most relating to the effects of drug abuse on the heart. He has also published 12 books and is an associate editor for the Journal of Cardiovascular Toxicology.

, PhD, is deputy director of academic programs at the Victorian Institute of Forensic Medicine as well as professor and head of the Department of Forensic Medicine at Monash University. He earned his PhD in pharmacology from Melbourne University. He has been involved in the analysis and interpretation of the biological effects of drugs and poisons for nearly 40 years, and lectures widely on these subjects. He is a member of numerous professional societies and has published more than 200 peer-reviewed scientific papers in journals as well as many other reports, book chapters, and encyclopedia articles. He is the main author of The Forensic Pharmacology of Drugs of Abuse and the editor for drugs and toxicology submissions for the journal Forensic Science International.

"It is easy today for physicians to become technicians rather than professionals. A technician knows how to respond to a problem. The professional has the depth of knowledge that brings real understanding to a problem. This book presents a comprehensive view of each subject that it discusses. Dr. Karch's book is a book for professionals."
—Journal of Forensic Science