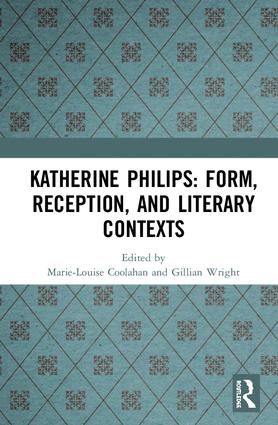 Katherine Philips (1632–1664) is widely regarded as a pioneering figure within English-language women’s literary history. Best known as a poet, she was also a skilled translator, letter writer and literary critic whose subjects ranged from friendship and retirement to politics and public life. Her poetry achieved a high reputation among coterie networks in London, Wales and Ireland during her lifetime, and was published to great acclaim after her death. The present volume, drawing on important recent research into her early manuscripts and printed texts, represents a new and innovative phase in Philips's scholarship. Emphasizing her literary responses to other writers as well as the ambition and sophistication of her work, it includes groundbreaking studies of her use of form and genre, her practices as a translator, her engagement with philosophy and political theory, and her experiences in Restoration Dublin. It also examines the posthumous reception of Philips’s poetry and model theoretical and digital humanities approaches to her work.

This book was originally published as two special issues of Women’s Writing.

1. Can a Woman Deserve the Name of Enemy? Gender, War and Law in Katherine Philips’s Corneille Translations Penelope Anderson

3. Hermeticism in the Poetry of Katherine Philips Sajed Chowdhury

5. Making the Case for Artaban: Robert Leigh, Katherine Philips and the Court of Claims Patrick Tuite

6. "You Who in Your Selves Do Comprehend All": Notes Towards a Study of Queer Union in Katherine Philips and John Milton Paula Loscocco

7. "I Long to Know Your Opinion of It": The Serendipity of a Malfunctioning Timing Belt or the Guiney–Tutin Collaboration in the Recovery of Katherine Philips Andrea Sununu

12. A Computational Approach to the Poetry of Katherine Philips Kathleen Taylor and Gillian Wright

Marie-Louise Coolahan is Professor of English at the National University of Ireland, Galway, Ireland. She is the author of Women, Writing, and Language in Early Modern Ireland (2010), and is currently the Principal Investigator of the ERC-funded project, RECIRC: The Reception and Circulation of Early Modern Women’s Writing, 1550–1700.

is Reader in English and Irish Literature at the University of Birmingham, UK. She is the author of Producing Women’s Poetry, 1600–1730: Text and Paratext, Manuscript and Print (2013), and she is currently editing a collection of Aphra Behn’s poetry for Cambridge University Press.

This series explores a wide range of women’s writing from across the world, spanning several centuries up to the First World War. Each volume consists of a collection of essays focusing on a specific theme, time-period, genre, or author, ranging from the canonical to lesser-known and neglected writers. These books will be a valuable resource for scholars and students of literature and history, as well as for more general readers with an interest in historical women writers and their work.