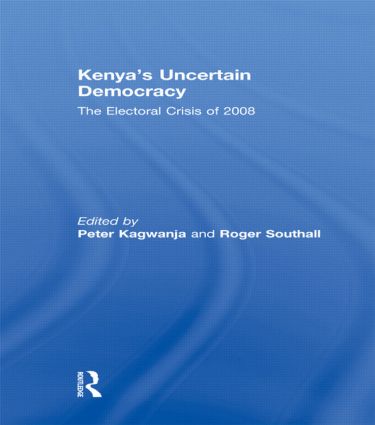 The Electoral Crisis of 2008, 1st Edition

The plunging of Kenya, until recently a centre of stability and growth in East Africa, into political and economic uncertainty following the general election of December 2007 is regarded as a major cause for global and African concern. It is widely accepted that the elections were deeply flawed, and that there was electoral malfeasance by all the major players. President Kibaki's rapid declaration of victory in the face of a heavily disputed election and his determination to hold on to the levers of state power precipitated a deadly crisis, communal violence and economic decline. A power-sharing deal between Kibaki and Opposition leader, Raila Odinga signed in February seems to be holding, but Kenya ranks among the worlds’ growing number of democracies at-risk.

This book takes a new look at the 2007 election, the post-election crisis, the underlying interaction of ethnicity, class and political power; forced displacement, the role of international forces; and the country’s power-sharing arrangement. The study will draw upon the expertise of a variety of leading experts on Kenya, and will be edited by Peter Kagwanja and Roger Southall. The overall project was based on a workshop in Nairobi on 6-7 December 2008.

This book was published as a special issue of the Journal of Contemporary African Studies.

2. The Politics of Displacement in Multi-Party Kenya Priscah Kamungi, Centre of Conflict Studies, University of Nairobi

Peter Kagwanja is President of the Africa Policy Institute and research fellow at the University of Pretoria, South Africa.

Roger Southall is Editor of the Journal of Contemporary African Studies and Professor of Sociology at the University of the Witwatersrand, South Africa.