Key Debates in the Translation of Advertising Material
Special Issue of the Translator (Volume 10/2, 2004) 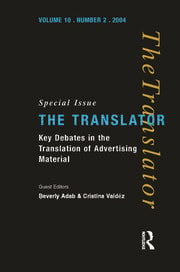 Key Debates in the Translation of Advertising Material: Special Issue of the Translator (Volume 10/2, 2004)

Much has been written about the marketing aspects of promotional material in general, and several scholars (particularly in linguistics) have addressed questions relating to the structure and function of advertisements, focusing on images, rhetorical structure, semiotic functions, discourse features and audio-visual media, amongst other aspects of the genre. Not much, on the other hand, has been written within translation studies about the complexities involved in the transfer of an advertising message.

Contributors to this volume explore various interdependent aspects of the interlingual and intercultural transfer of an advertising message. They emphasize features of culture specificity, of multi-medial semiotic interaction, of values and stereotypes, and most importantly, they recommend strategies and approaches to assist translators. Topics covered include a critique of the Western-based approach to advertising in the context of the Far East; different perceptions of the concept of cleanliness in advertising texts in Italy, Russia and the UK; the Walls Cornetto strategy of internationalization of product appeal, followed by localization; the role of the translator in recreating appeal in different lingua-cultural contexts; what constitutes 'Italianness' in advertisements for British consumers; and strategies for repackaging France as a tourist destination.

Key Debates in the Translation of Advertising Material: Contents

Research on advertising has been conducted mainly from within disciplines such as marketing and reception studies. Within translation studies, research has focused more on comparative analysis of language pairs for intersystemic differences, and more recently on intercultural differences in product appeal and cultural values. Advertising as text type was most comprehensively used and developed within Western cultures, then 'exported' to other cultures. Initially the assumption was that the message could be translated and the product would sell on the basis of Western value-based market research, although this is now clearly shown not to be the case, as contributors to this volume all demonstrate through empirical studies. The introduction to this volume offers a comprehensive survey of work done in the field, both within and outside translation studies, outlines the use of semiotics as a suitable framework for research, and summarizes the key issues relating to the global vs. local debate.

Translating advertising copy is like painting the tip of an iceberg. What you see are the words, but there is a lot behind the words that must be understood to transfer advertising from one culture to another. This paper demonstrates that consumer behaviour and the way consumers communicate are heavily dependent on their cultural values. For advertising, one important distinction is between low- and high-context communication, which can help us understand that people categorize the world in different ways. Another important influence of culture is on consumers' needs, motives and emotions. Variations in interpersonal communication styles are reflected in advertising styles. Thus, effective advertising uses a culturally appropriate advertising style. For example, in Europe and Asia these styles are very different from US advertising style, of which rhetoric is an integral part. Another idea which is expanded in the present paper is that the persuasive communication function of advertising is biased toward rational claims. This is the sort of style that can be translated, but translation does not necessarily render such advertising appropriate for other cultures.

Translating Advertisements across Heterogeneous Cultures, George Ho, pp 221-243
This paper argues that the translation of advertising adds economic value to the value chain of the whole marketing process. Hence, translation is not only a linguistic and cultural activity, but also a key commercial activity. The study also posits that translators are knowledge workers who contribute to the new global economy, and that their contribution should be properly recognized and rewarded. The case studies discussed further reveal that translation across heterogeneous cultures involves more than text transfer and cultural adaptation. It also involves conversion between different mindsets, characterized by different kinds of cultural psychology. In the translation of advertising, the strategy of 'intentional betrayal' proposed by some translators often achieves excellent results. It is suggested that the 'popular taste' of consumers in the target market is an important factor in the decision-making process in commercial translation, especially in the case of advertising texts.

Exploring Advertising in a Global Context: Food for Thought, Carmen Millán-Varela, pp 245-267
The aim of this article is to explore the policies and strategies used by a multinational company (Unilever plc) to advertise one of its star products (Cornetto ice cream) in various cultural settings, namely Europe, Asia and South America. Given that eating habits vary from country to country, the advertising and success of a food product such as ice cream will be subject to both cultural and socio-economic constraints, hence the need to take into account the cultural specificity of each context when designing a marketing strategy. Kress and van Leeuwen's model of visual design (1996/2001) is applied to the analysis of a corpus provided by Unilever, which comprises all available Cornetto ads since the product's very first appearance on the market. The main objective is to explore how the same brand and product have been adapted to suit the domestic needs of each context, or rather, how a balance has been achieved between specific local needs and the company's global aspirations. This paper focuses on the role played by culture and ideology in the elaboration of these adverts, taking into account not only discourse features, but also visual elements and semiotic functions.

Women, Water and Cleaning Agents: What Advertisements Reveal about the Cultural Stereotype of Cleanliness, Ira Torresi, pp 269-289
Advertising tends to conform to buyers' sets of values in order to establish a common ground for communication and persuasion, thus fostering the replication of cultural habits. A number of such habits are of special interest to translators, since they are so well-rooted in our consciousness and taken as universal that their culture-specific nature might be overlooked. In particular, a superficial translation of advertising texts centred upon such 'hidden' stereotypes might result in marketing disaster. Translators should therefore make sure that they activate their cultural mediation resources as well as their linguistic skills when working on advertising texts. A useful practice in this regard is to undertake an in-depth and critical review of a recent corpus of advertisements in the target language/culture. A comparative analysis of several corpora from different cultural areas might provide an even better understanding of stereotypes and reveal their relative, culture-specific nature. This paper offers a pilot analysis of British, Italian and Russian advertisements for cleaning products and investigates the cultural stereotype of cleanliness emerging from them, highlighting culture-specific traits and commenting on their possible origin.

Similar Concepts, Different Channels: Intersemiotic Translation in Three Portuguese Advertising Campaigns, Elsa Simões Lucas Freitas, pp 291-311
The main purpose of this article is to study the way in which the same concept is conveyed in different media involved in the advertising campaign for a given product or service, considering advertisements as semiotic entities and thus translation as an intersemiotic process. Three sets of recent Portuguese campaigns are analyzed, which include television, magazine and radio advertisements. The article demonstrates that some elements can be kept in an almost unchanged form, whereas others have to be altered to achieve similar effect. The ads conveyed by different media strive for an effect of equivalence in their results, making the most of whatever resources the specific languages can offer. Detailed analysis of the advertisements also shows that the meaning of the advertising texts, i.e. the main concept of the campaign, is construed by the viewer in an integrated way, as part of a whole discourse in which the media has a complementary function.

One of the many effects of the new economy has been the deconstruction of traditional market channel distribution. Today, the traditional 'producer-wholesaler-retailer-consumer' sequence of buying and selling is changing as the World Wide Web has created a direct link between producer and customer (B2C - Business to Customer) and between producer and producer (B2B - Business to Business). Like many other economies, the Italian one, which is largely based on small and medium sized industries, has had to come to terms with the challenge of competing in this new marketplace, with the handicap of having to do so in a language other than its own. This paper sets out to investigate how the Italian agro-food sector promotes its products beyond the national market. In order to examine the interdependence between medium and message, a corpus of electronic promotional texts for Italian foodstuff is compared and contrasted with a comparable corpus of printed advertising material from specialized magazines in English. After examining common strategies adopted in the two media, specific translation strategies adopted in the web corpus are analyzed.

Brand Leadership at Stake: Selling France to British Tourists, Carolyn Sumberg, pp 329-353
For the first time in more than a decade, France has been overtaken by Spain as British tourists' preferred holiday destination (Sunday Telegraph, 13/4/03). The tourist brochure plays an important role in the promotion of a country and as such has become a key factor in an economic activity that generates significant income. There has been a deliberate effort by the Spanish tourist board, well documented by translation scholars, to maximize Spain's attraction for other nationalities, with careful consideration of the appeal of their tourism materials so far as design, production and translation are concerned. Through a study of a comparable corpus of tourist brochures, this paper considers how the approach to target text production could be said to enhance or detract from the effectiveness of tourist brochures translated from French into English and whether their promotional function is being achieved.