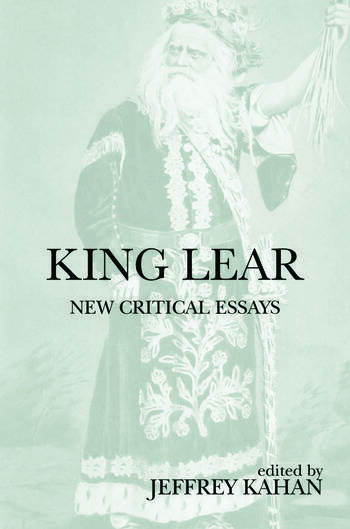 Is King Lear an autonomous text, or a rewrite of the earlier and anonymous play King Leir? Should we refer to Shakespeare’s original quarto when discussing the play, the revised folio text, or the popular composite version, stitched together by Alexander Pope in 1725? What of its stage variations? When turning from page to stage, the critical view on King Lear is skewed by the fact that for almost half of the four hundred years the play has been performed, audiences preferred Naham Tate's optimistic adaptation, in which Lear and Cordelia live happily ever after. When discussing King Lear, the question of what comprises ‘the play’ is both complex and fragmentary.

These issues of identity and authenticity across time and across mediums are outlined, debated, and considered critically by the contributors to this volume. Using a variety of approaches, from postcolonialism and New Historicism to psychoanalysis and gender studies, the leading international contributors to King Lear: New Critical Essays offer major new interpretations on the conception and writing, editing, and cultural productions of King Lear. This book is an up-to-date and comprehensive anthology of textual scholarship, performance research, and critical writing on one of Shakespeare's most important and perplexing tragedies.

1. Introduction  - Jeffrey Kahan  2. The Evolution of King Lear - R.A. Foakes  3. The Evolution of the Texts of Lear - Richard Knowles  4. King Lear and Early Seventeenth-Century Print Culture - Cyndia Susan Clegg  5. "The injuries that they themselves procure": Justice Poetic and Pragmatic, and Aspects of the Endplay, in King Lear  - Tom Clayton 6.What Does Shakespeare Leave Out of King Lear? - Jean R Brink  7. The Cause of Thunder: Nature and Justice in King Lear - Paul A. Cantor  8.Hope and Despair in King Lear: The Gospel and the Crisis of Natural Law - R.V. Young  9. Lear in Kierkegaard - Stanley Stewart  10. The Smell of Mortality: Performing Torture in King Lear  - Edward L. Rocklin  11. Some Lears of Private Life, from Tate to Shaw - Christy Desmet  12. If Only: Alternatives and the Self in King Lear - Jeffrey Kahan

Jeffrey Kahan is Associate Professor of English at the University of La Verne in California, and completed his Ph.D at the Shakespeare Institute, University of Birmingham. He is the author of Reforging Shakespeare (1998) and The Cult of Kean (2006) and editor of Shakespeare Imitations, Parodies and Forgeries, 1710-1820 (3 vols. Routledge, 2004).