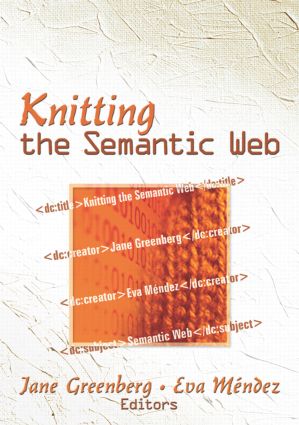 The Semantic Web, extends the popular, day-to-day Web, enabling computers and people to effectively work together by giving information well-defined meaning. Knitting the Semantic Web explains the interdisciplinary efforts underway to build a more library-like Web through “semantic knitting.” The book examines foundation activities and initiatives leading to standardized semantic metadata. These efforts lead to the Semantic Web—a network able to support computational activities and provide people with services efficiently. Leaders in library and information science, computer science, and information intensive domains provide insight and inspiration to give readers a greater understanding of the evolution of the Semantic Web.

Librarians and information professionals are uniquely qualified to play a major role in the development and maintenance of the Semantic Web. Knitting the Semantic Web closely examines this crucial relationship in detail. This single source reviews the foundations, standards, and tools underlying the Semantic Web and presents thoughtful perspectives in the context of 2.0 developments. Many chapters include figures to illustrate concepts and ideas, and the entire text is extensively referenced.

Topics in Knitting the Semantic Web include:

Jane Greenberg, PhD, MS, is Associate Professor at the School of Information and Library Science, University of North Carolina at Chapel Hill, Director of the SILS Metadata Research Center, and was recently awarded a Frances Carroll McColl Professorship. She is the Principal Investigator of the Memex Metadata (M2) for Student Portfolios project. She is a member of the Dublin Core Metadata Initiative (DCMI) Advisory Board and a co-chair of the DCMI Tools Working Group. She regularly serves on national and international digital information and metadata conference program committees, and was program co-chair of the Dublin Core 2003 conference. Dr. Greenberg was the Principal Investigator of the AMeGA (Automatic Metadata Generation Applications) project and the Metadata Generation Research (MGR), collectively sponsored by Microsoft Research, OCLC Online Computer Center, and the Library of Congress.

Eva Méndez Rodríguez, PhD, is Associate Professor at the University Carlos III of Madrid, where she has been teaching and conducting research since March 1997. She is a member of the Dublin Core Metadata Initiative (DCMI) Advisory Board, and served as co-chair of the International Conference on Dublin Core and Metadata Applications (Vocabularies in Practice) held in Madrid in 2005. Her research focuses on Semantic Web technologies applied to digital information systems and services, with an emphasis on metadata standards and vocabularies. In addition to the DCMI, Dr. Méndez has served on many conference and workshop program committees worldwide. She has also served as an advisor on information practice and policy for countries in the European Union and Latin America. Dr. Méndez was Fulbright-EU Research Scholar at University of North Carolina at Chapel Hill, School of Information and Library Science, Metadata Research Center, during the academic year 2005–2006.